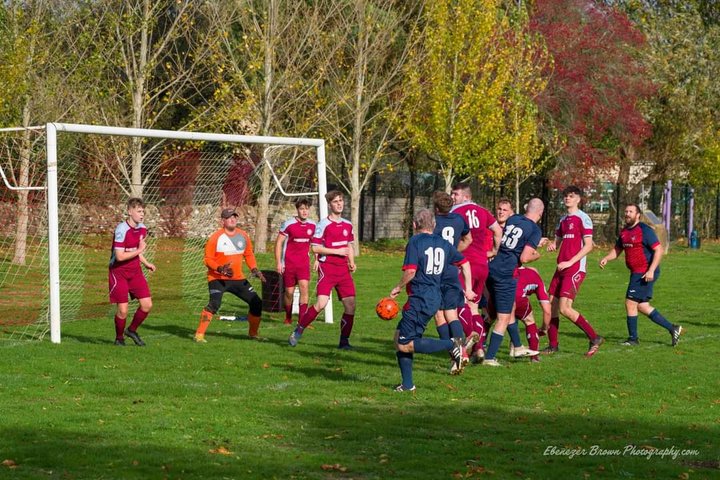 It's Rice Rice baby as Stonesfield go big in the cup.

Brothers Carry and Raffy Rice provided four of the goals in another Stonesfield cup win in October as their Fred Ford Cup ambitions rolled into round two. Fresh from their Charity Cup win two weeks ago, where Carry Rice scored all three goals to take them through, his hat-trick heroics once again put Stonesfield into another round two draw, at the expense of Charlbury, only this time he had a little help from his friends and family. Brother Raffy scored once, with further goals from Sammy Hart and Sam Bodingham (2). Charlbury battled throughout and weren’t to be denied their own goal scoring antics. Martin Nutt scored twice with Billy Sweet also scoring in the 7-3 reverse.

The top three sides all won again this weekend to put some daylight between them and the peloton of teams behind them in the table.
Freeland won their third game in October as they saw off Milton in the battle between third and fourth. Harry Lake’s goal for Milton was in vain for the home side. Adam Lonsdale, Conor Almond and Liam Hare’s goals gave Freeland a 3-1 win and all three points.

Hailey remain second after going goal crazy against Spartan Rangers. No less than six different Hailey players found the net in their 8-1 win. In fact, Hailey were four goals to the good inside fifteen minutes in a rampant start and had seven on the cards before half-time. Spartan restored some pride in scoring in the second half to at least draw the second period. Hailey’s goal scorers were Matt Wood, Matt Knapton, Cam Foster, Nathan Kimber, Luke Bolley and Jack Wood (2). Spartan also scored an own goal as well.

Enstone had a fright for the second week in a row before pulling through for all three points. An Enstone own goal, along with Jacob Hughes and Rui Alves goals had Minster well in the game but Jay Mair, Nathan Bott and Josh Hunt scored one each for Enstone, super sub Aaron Witham coming off the bench to score twice to keep Enstone top with a 5-3 win.

RAF Brize Norton Social moved back to the top of Division One after a topsy-turvy encounter with Hailey Reserves. In fact they needed two lots of quick fire doubles to rescue all three points when a draw looked inevitable at one stage.
Hailey took the lead after just six minutes, Gary Mitchell benefitting from some sloppy Brize defending to rifle home past the stranded Greig Masson. It was a goal that sparked Brize into life but without any real end product. Ben Treadgold and Zac Vale began seeing more of the ball but nothing clear cut materialised in the final third and Hailey scrambled hard without ever feeling properly threatened. That all changed with ten minutes to go. First Sam Wright made a superb point blank save with his legs to divert the ball over the bar, before James Sinclair headed wide from four yards out, holding off some serious Hailey pressure and evading a hint of a high boot in the box at the same time. Brize peppered the box with numerous crosses and corners and eventually Vale got some luck as he peeled off his marker at the right side of the box and headed home the equaliser on 43 minutes. Brize managed to go in at half-time ahead, James Sinclair prodding home from a few yards out with the referee blowing for half-time straight after.
Into the second half and Hailey came out rejuvenated, exerting more pressure on the Brize box. From one corner, the referee blew for a penalty for shirt pulling and Mitchell slammed home his second of the game from twelve yards out, eight minutes after the break. And so it stayed until the 72nd minute. Maahir Alam finding space outside the box and shooting hard and low under the keeper to restore Brize’s lead. In the 75th minute the points were all but secured when Phil Kenyon found the bottom corner following another scramble in the box to finally give Brize some daylight. Hailey went all out to try and make the last fifteen minutes more nervy but the win was guaranteed when substitute Nathan Nyenya turned cutely on the edge of the box, flooring his marker in the process and calmly put the ball past Wright for a 5-2 win.

Hatherop prevailed in the battle of third versus first as they hosted Carterton FC. A Charlie Bailey strike and a Carterton own goal preserved Hatherop’s unbeaten start to the season and leaves them just two points off top spot with a couple of games in hand.

Aston join Hatherop on 13 points after a 3-1 against Ducklington. Jasper Winder’s penalty was cancelled out by Luke Beauchamp’s goal and Sam Aston’s double gave Aston all three points.

In the battle of the bottom two Combe defeated Heyford Athletic to move ahead of Faringdon in the table. Ryan Stockford and Sam Edwards’ goal gave the home side all three points in a 2-0 win.

Luke Rippington’s hat-trick gave Witney Royals a second league win to move up into the middle of the table. Corey Donohue’s sixth goal of the season rounded off the 4-0 win over Chadlington.

Brize Norton are the new leaders of Division Two but had to come from behind to gain all three points against Milton Reserves. Milton were 2-0 ahead early in the first half thanks to goals from George Ford and Dan Hooton. But Brize forced their way into the game thanks to Jacob Hambridge’s hat-trick. Jason Hirschfield scored a spectacular free kick, Lee Litton and Morgen Oxendale also scored for Brize and despite further goals for Milton from Vinny McGibson and an Alfie Gardner own goal, substitutes Adam Davis and Olly Traynor made sure of the win as Brize finished 8-4 victors. Such was the manner of other results, the defeat drops Milton four places and into the bottom two.

Andy Stratford and Jack Knight both scored a hat-trick in Eysnham’s demolition of Spartan Reserves. In the end it was eleven without reply as Luke Hamill and Peter Edwards both scored twice each and Ben Oates completed the rout for Eysnham’s second win of the season.

Faringdon Town A have their second win of the season after beating Siege FC. Siege had the better of the opening exchanges but couldn’t find a way to score a goal. Faringdon seized one of their first opportunities as Adam Sly put them ahead. Tom Burdett doubled their lead but Siege gave themselves hope through Danny Alsworth. Siege would have hoped to restore parity but instead a sloppy back pass put Burdett through to score his second and there was nothing anyone could have done about Adam Sly’s free-kick as it sailed into the top corner for 4-1. Rob Marsh pulled one back for Siege but Burdett completed his hat-trick and gave Faringdon the three points that pulled them out of the bottom two.

Leafield are off the bottom with a surprise 3-0 away win against high flying Witney Royals Reserves. Mateus Barros’ double and Alison Demetrio’s second goal in two games gave Leafield the win.
Kingham and Bampton played out the only draw in the division. Damien Corbin’s penalty cancelled out by Jordan Day’s strike in a 1-1 draw.

Wootton Sports have a little bit of breathing space at the top of Division Three after results went their way on Saturday afternoon.
Asha Townsend took his goal tally to 19 for the season with another hat-trick in Wootton’s 7-1 win over Chadlington Reserves. Lee Spencer struck twice with further goals coming from Michael Steers and Karl Ware. Mauro Esteves replied for third placed Chadlington.

Wootton’s two other challengers both fell to their first defeats of the season.

Fourth placed Yarnton A, who handed Wootton their first defeat last week, succumbed to Stonesfield Reserves by the odd goal in five. Diogo Goncalves and Ethan Penny scored for Yarnton but Jake Haigan’s double brought things level and Kieran Grant grabbed the winner for Stonesfield’s fourth win of the season.

Deer Park Rangers lost to Leafield Reserves as the latter grabbed their first win of the season following a second half comeback. Rangers were 1-0 up at half-time thanks to a Dan Squires strike in the 22nd minute but Leafield showed their resolve in the second period, Icaro Popi scoring from the spot, Felipe Silva and Osni Figueiredo both scored from open play and Leafield saw the game out as 3-1 winners.

FC Mills remain at 100% for the season after a 2-1 win against Kingham Reserves. Ellis Godin struck for Kingham but James Morgan’s brace grabbed the points for Mills who will have aspirations of catching the teams at the top with their three games in hand.

Eynsham Reserves prevailed in the battle at the bottom as they faced off against Carterton Town. The teams were twelfth and eleventh respectively in the league but had swapped places by full time. Kane Lewin, Jack Turner and Jack Morgan all scored their first goals of the season for Eynsham as they won 3-1. Harry Perkins hit back for Carterton but that was as good as it got.