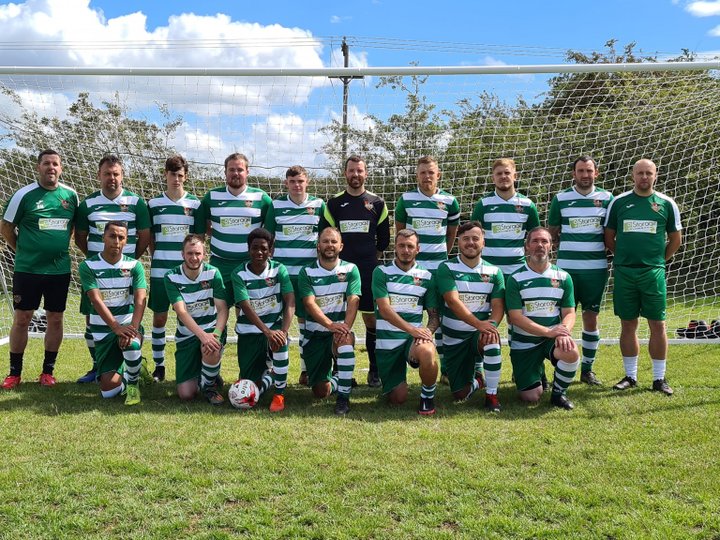 It’s been six months since the last competitive ball was kicked in anger in the Witney and District after Covid-19 brought last season to an unceremonious halt.

After a further two week postponement this year, fixtures were finally under way this weekend, albeit in strange and safe environments.

The new league set-up saw the number of divisions reduced from 5 to 4. Three new teams (and one team who have changed their name) have entered the fray, hoping to pit their wits against the established teams in the region as 48 teams set out to do battle over the next 8 months to try and win silverware and promotions.

Premier Division
A new season commences but familiar teams earned victories in the first round of fixtures in the 2020-2021 season. Hailey FC are the early pace setters after handing out a 9-0 thrashing to Tower Hill. No less than 7 different scorers found the net as Matt Knapton, Freddie Buckingham, Moh Semlali, Devon Wright and Perry Tinson all scored once.

Jack Wood and Tom Gregory also opened their accounts for the season as they both hit two to put lacklustre Tower Hill to the sword.

There was a local derby for two sides who are well acquainted with each other after last season as Carterton FC hosted Carterton Town FC. The sides faced each other no less than 4 times last year as they met in two cup competitions, as well as the league, and in this early season clash, Carterton FC prevailed in a five goal encounter.

Mark Threlfall scored for Carterton only for Town to hit back through Mark Williams and John Sword. A Craig Mays double secured the three points for Carterton FC as they got their season off to a winning start.

Enstone are the Premier Division new boys but showed little signs of being phased of their elevated status as they swept aside Milton. The Bott brothers both found the net as Dan scored once. Nathan was able to go one better and notched two with Reece Bayliss and Jordan Godfrey scoring the other goals as Enstone finished off their 5-0 victory.

Jamie Macdonogh scored a hat-trick as he set Carterton Rangers well on their way to victory over Spartan Rangers. It finished 8-2 as Myles Easton scored two for Carterton with Daniel Barnes, Liam Day and Damien Williams all finding the net once. David Pryse and Jon Clarke responded for Spartan but it wasn’t their day.

Minster Lovell earned a hard fought victory over Charlbury Town in the remaining fixture. Mykel Ryan scored on his debut for Minster. Stefan Lang restored parity for Charlbury but Henry Traas scored to give Minster the three points in a 2-1 win.

Division One
Matt Chadwick fired in a hat-trick and also managed to keep a clean sheet as Chadlington hit the top of the table in style as they brushed aside Spartan Rangers Reserves 8-1. Chadwick had already scored all three of his goals when he replaced the injured Chadlington keeper halfway through the second half.

Hook Norton, who were top of Division Two when the season stopped last year, instantly returned to winning ways in Division One with an away victory over Kingham All Blacks. A competitive contest saw both sides find the net, Dan Lay hit two for Kingham but a Kingham own goal and Elliot Williams strike had Hook Norton well in the game.

Hook Norton managed to take control of the game as time went on and goal machine Jay Mair and Josh Hunt both hit two goals each as Hook Norton eventually coasted to victory, winning 6-2.

Carterton Reserves also made a winning start to life in Division One as they recorded an away victory against Bletchington. Chris Hirons and Ryan Colleton found the net once as Carterton won 2-0.

Witney Royals got their season off to a winning start as they safely dispatched Brize Norton. Adam Davis gave Brize and early lead pouncing on a underhit back pass. Royals then has a great chnce to equalise, then they were awarded a penalty, but Ben Liddle's well struck kick was superbly saved by Darren Brooks. Royals equalised just before the break, when Miles Roberts free kick was headed from from close range by Stu Tranter. The 2nd half was dominated by Royals and they added further goals by Jordan Pratt and Ryan Harris.

Division Two
Combe returned to the Witney and District league in impressive style as they swept aside Bourton Rovers in a nine goal thriller. Connor Hobley, making his first start in men’s football, had a dream debut as he helped himself to a perfect hat-trick for Combe. Team mates Archie Hamilton, Toby Cox and Louis Beresford also scored as Combe hit their opponents for six. Bourton replied through Lee Mosson, Will Pulham and Ben McPhilimey to half the deficit but Combe prevailed 6-3.

Eynsham SSC and Cassington Rangers (formerly East Oxford Rangers) also hit six and had hat-trick heroes in each of their respective fixtures. Eynsham played out an epic game with Carterton Town B which saw 10 goals scored. Carterton amassed four different goal scorers as Ryan Clement, Ian Sparkes, Carl Ford and Nathan Nyenya all got in on the action. But Eynsham hit back through John Ayres, a Stephen Chappel brace and it was left to Ben Oates to pick up his hat-trick and all three points for Eynsham.

It was far more comfortable for Cassington Rangers as they cruised to a 6-0 win over Chadlington Reserves. No surprises with their hat-trick scorer as Jason Blackman continued where he left off last season in grabbing three goals. Nathan Prestidge and Josh Clarke also hit the net with a Chadlington own goal compounding their misery.

There weren’t quite as many goals between Milton Reserves and FC Ascott Rangers but there was still enough for yet another Division Two hat-trick. This time it was Dan Hooton as he steered Milton Reserves to victory. Travis Cozier grabbed a goal back for Ascott but Martin Kraus hit the fourth for Milton to complete the 4-1 victory.

Aston managed to score in both ends as Luke Beauchamp put the ball into his own net but Sam Aston, Kieran Watts and Aaron Robins all scored once each to secure the win.
Meanwhile Ducklington travelled to Wootton and managed to win by the same score. Harvey Butler, a Dan Stanley screamer and Ady Kew all scored one each. Former Duck player Liam Gubbins had actually put the the hosts in front but Ducklington travelled back with all three points.

Division Three
FC Mills are at the summit of Division Three after the first round of games as they safely negotiated their way past FC Ascott Rangers. Despite Jason Bufton getting on the scoresheet for Rangers, FC Mills were too good for their opponents as they hit six past them. Dan Hedges bagged a brace with Aaron French, Stu Cutts, Joel Boetang and Darren Smith scoring the other four goals.

Hailey A are in second place after putting five past Aston Reserves. Ryan Stockford, Owen Partridge and Josh Anderson all scored once each whilst Curtis Hathaway went one better in grabbing a double. Darren Light managed to score on debut for Aston Reserves but it was too little, too late to prevent Hailey taking all three points.

Brize Norton Reserves find themselves third after they put four past Kingham All Black Reserves and kept a clean sheet in the process. Chris MacNeill scored two for Brize with Dan Sollis adding a third. The three points were secured when Luke Simmons’ quick free kick caught Kingham napping to bring up the fourth and final goal.

Newly formed Hook Norton Reserves followed in their first teams footsteps by recording a victory on the opening day of the season. They faced off against Stonesfield Reserves who had Sam Hibberd to thank for putting them on the scoresheet. But Hook Norton hit back with goals from Lewis Smith and Mitchell Faulkner to complete the 2-1 victory in their inaugural game.
Chipping Norton Town were unable to field a side and sadly had to forfeit their game against Sherbourne Harriers. Sherbourne were automatically given the three points.