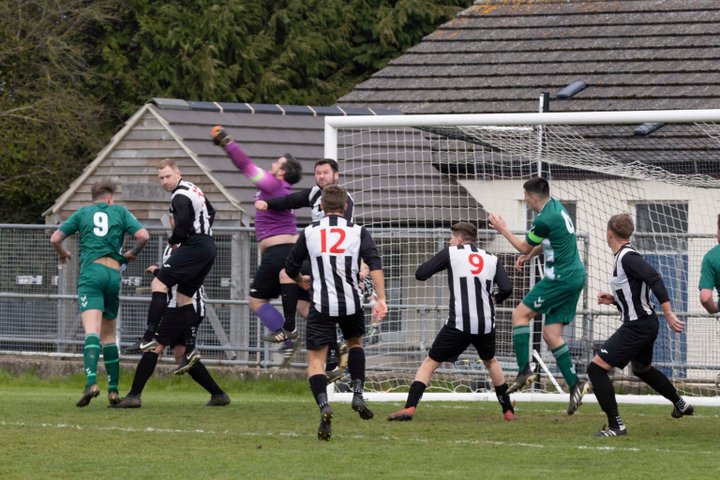 Perfect Day for Rangers as Hailey title bid halted for another week.
Premier Division
Liam Day hit a brilliant second half brace as Carterton Rangers stunned Hailey at Kilkenny Lane and prolonged the title battle for one more week at least. Victory for Hailey would have given them the title and the game started in auspicious fashion for the visitors as they were awarded a penalty just four minutes into the game. Nathan Kimber stepped up and fired the ball low and hard to the keeper’s right but Daniel Floyd was equal to it in the Rangers’ goal and the scores remained level. Not for long though. Hailey earned themselves a barrage of corners and eventually one was headed home by Luke Bolley to give Hailey the lead. The pressure continued with Rangers struggling to get out of their own half but Floyd saved anything that was goal bound. Rangers fashioned one chance before the break, a ball squared across the box found Blue Addison in lots of space but he could only toe poke the ball wide and Hailey went in ahead at half time.
Hailey started the second half brightly as well as they went in search of goal number two but still couldn’t find a way to beat Floyd. Instead, Rangers drew level as Liam Day created an opening on the edge of the box and his low shot bounced awkwardly off the hard ground and squirmed under Cody Davies in the Hailey goal. Hailey became unnaturally goal shy in the second half. Nathan Kimber and Joey Aust wasting chances in front of goal. And Rangers made their chances count as Blue Addison also got space on the edge of the box and this time Cody Davies had no chance as the ball curled beautifully into the far corner as Rangers hit the front with 12 minutes to go. Hailey showed their typical resolve as they fired in an equaliser just 4 minutes later. Sam Wheeler blasting home from the left side of the box to leave Floyd no chance. Just as the game was heading for a draw, Liam Day burst through the Hailey defence, beating the offside trap in the process and rolled the ball past Davies and into the empty net to inflict a first league defeat on Hailey this season.
Division One
Chadlington earned the joint biggest win of the day with a 6-1 win over Bampton United. Rocky Burton was the hero as he hit a hat-trick with more goals coming from Toby Walker, Hans Korge and Ethan Bennett. Karl Pritchard scored for Bampton but they were soundly beaten on the day.
Freeland are back in control of the Division One title race as they edged out Hailey Reserves. Moh Semlali and Luke Perkins’ goals gave Freeland a scare but Joe Burgess’ strike and Rob Fotherby’s brace earned Freeland all three points and top spot in the process. Freeland can win the title against Bampton next Saturday.
Wootton managed to jump three league places as they were awarded a walkover victory against Bletchington.
Division Two
Combe inflicted a second league defeat of the season on RAF Brize Norton Social with a 3-1 win. Ryan Chambers’ brace set Combe up for victory and although Tom Dyer pulled a goal back for Brize, Charlie Ibbotson’s goal secured all three points for Combe.
Ducklington and Spartan Reserves played out a goal fest of a game at Ducklington with eleven goals scored between the two sides. Jamie Harris took the headlines with four timer with Harvey Butler, Lewis Hathaway and Matty Eagle (2) rounding off Ducklington’s goal frenzy. Rory Murphy, Daz Craig
and Alex Thomson put some respect into the score line as Spartan ended their season with a defeat.
Fratellos walkover victory over Hook Norton Reserves means they’re now just a point behind Brize with three games in hand.
Division Three
Champions Faringdon Town A recorded a narrow victory over Eynsham SSC. Ben Partlett and Owen Johnson fired home for hosts Eynsham but Faringdon were able to go one better thanks to goals from Robbie Harrington, Alistair Eccleston and Peter Fletcher.
Dan Hooton’s hat-trick gave Milton Reserves a sixth win of the season as they beat Leafield in a seven goal thriller. Caio Jucius’ brace and Michael Sanders’ goal put Leafield into the game but Owen Hancock got a fourth for Milton to snatch all three points.
FC Mills grabbed a surprise point against second placed Hailey A. Mills, who are eighth in the table, scored through Stu Cutts and Dean Spivey. Craig Greenhalgh and Darren Tasker’s goals grabbed a share of the spoils for Hailey.
Division Four
Aston Reserves defeated Freeland Reserves to ensure that Witney Royals are guaranteed of a second placed finish this year. Darby Wood scored for Freeland but goals from Neil Cooley, Jay Whelan and Lewis Scott gave Aston all three points and condemned Freeland to a fifth defeat of the season.
The battle between Stonesfield Reserves and Kingham Reserves went the way of Kingham as they won 2-0. Ian Ellis and Jake Godfrey scored a goal each to give Kingham victory.