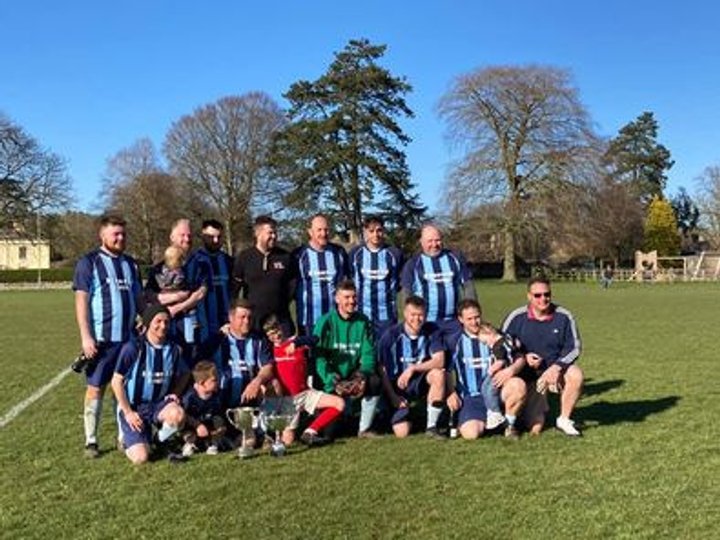 Witney and District unites to pay tribute to Dev
Wright
.
Tributes poured in from far and wide around the wonderful footballing community that we call
home this weekend as many were left shocked and saddened at the passing of Hailey FC’s
Dev Wright. Not only a terrific footballer, who had helped Hailey on their incredible run this
season, many other people were quick to mention what a fantastic person off the field Dev
was. He meant a lot to very many people and he will be so very sadly missed. Rest in peace
Dev!

Premier Division
Saturdays fixture staterd with Boro (2nd) and Stonesfield (3rd) both impecably giving a minutes silence after the tragic news reaching us from Hailey FC losing one of the players. All our thoughts are with everyone involved with Hailey and to Dev Wrights family and friends.
With the official ref not showing up, thanks to the Stonesfield coach who stepped in.
The window conditions yet again made for trying conditions, but in the first half there was still some decent football being played by both teams, Craig Mays going closest early on when the Stoney keeper denied him when 1 on 1. The Stonesfield attack got behind the Boro degence a couple of times but without posing a real threat on goal. Josh Brookes strike caused the Stoney keeper into action again with a pile driver from 20 yards. Craig Johnson also had a lobbed effort go narrowly over.
Halftime
Stonesfield 0 : 0 Hanborough
The second half started and an it burst into life when a Stonesfield defender jockeying the ball out was caught on the back of the knee by Craig Mays, the defender didnt take the challenge well and my word did he let everybody know about it. For the rest of the day. The game was getting scrappier by the minute as the wind kept howling accross the pitch, after a great bit of play down the right Josh Brookes cut the ball back to Sid Ashley to fire home! Only for the goal to be ruled out as the Stoney linesman thought the ball was going to go out so flagged for a goal kick and the Stoney ref agreed. Minutes later and Mays was rugby tackled in the box, which would have been more suited to the 6 nations than a football match, but unfortunately the ref could have had a good view of it, as nothing given. With 5 minutes left though great play down the Boro created one more chance and after a fine save from the Stonesfield keeper Arran Hobley was at hand to smash in the rebound. Stonesfield came closest to getting their goal in the last minute when an overhit cross caught the wind and looked to be looping in until Bennington reached up to tip the ball over the bar superbly. It leaves
Hanborough well placed in second, just a point behind leaders Hailey. Stonesfield have the
games in hand to challenge them for runners up spot but the title now looks out of reach.

The Premier Division’s Senior Cup got under way at the weekend with the bottom two sides,
Spartan and Milton facing off in the only tie in round one, to earn a place in the quarter finals.
A scrappy game was settled as early as the 10th minute, Milton skipper Jake Taylor pouncing
on a loose ball in the box following a corner. It was the only real chance of note in the whole
game, with both keepers failing to be troubled for the remainder. Milton held on for the win
and proceed into the last eight.

Kingham All Blacks received a walkover victory against Wootton however it wasn’t enough to
prevent Kingham from finishing bottom this season.

Junior Cup 1st Round
A bit of an upset in the Junior Cup as Division Two’s Aston beat Division One champions elect Freeland.

The visitors had started the game well, but it soon turned into an even contest with chances aplenty at each end. There were some good saves by both keepers but conversely there were many good chances spurned. It all contributed to an entertaining affair with the visitors taking the lead on 26 minutes when Freeland had a shot saved by Ash Edwards but it went straight to Rob Keylock who drilled home from the edge of the box.

Aston just about edged the second half, with the wind behind them, and score in the 73rd and 83rd minutes. The first was an open goal for Lewis Scott after the ball had pinged around the Freeland penalty box. The second was very well taken by Kieran Watts who received the ball from the wing, turned and carefully placed the ball in the corner.

Carterton continued their impressive showing in their opening season with a hard fought 2-1
win over Cassington Rangers. The victory, thanks to strikes from Adam Fisher and James
Kennett, saw Carterton leapfrog Cassington in the league and jump into fifth.
Fratellos still have their title ambitions in their own hands as they were awarded a walkover
victory against Combe. The Lechlade outfit are seven points behind leaders RAF Brize
Norton Social, but have a mammoth four games in hand. The fixture list finally puts the two
sides against each other for the first time this season next weekend.

A Markus Vinicius strike earned Leafield their eighth win of the season as they defeated
Chadlington Reserves 1-0. The win keeps them in control of the battle to finish third behind
Hailey A and Faringdon A.�
Eynsham SSC can still catch Leafield after receiving a walkover victory against FC Mills. The
three points puts them just two behind their third place rivals and have an all-important game
in hand as well.
Brize Reserves ended their season with an anti-climax. Wootton Reserves unable to raise a
side left them with a walkover victory and barring a huge win for Milton Reserves in their final
game, Brize are almost assured of a fifth place finish.

Champions Hatherop finished their first season in the WDFA with a 8-2 victory over Sherborne, irinically the only team to beat them this season.
The raced into a 2-0 lead in the opening minutes. But the visitors with a stiff breeze behind them leveled before the break with goals from Lee Salf and Josh Bettereidge.
The 2nd half though was a different story and the home side took advantage of the wind and stormed to a 6 further goals. The goals were shared with 2 apaiece for Dave Legg and Mani Ranawenda and 1 for Alex Griffith, Olly Taylor, Fabien Daniel and an own goal.

The race to finish second is down to two teams, Freeland Reserves and Witney Royals
Reserves. Both recorded convincing wins to maintain their pursuit of runners up spot.
Freeland are currently second after a 4-1 win against Leafield Reserves. Brandon Laing’s
goal for Leafield was a mere consolation as goals from Ross Henderson, Connor Smith,
Spencer Lancaster and Sam Blantz earned Freeland their thirteenth win of the season.
Royals are just a point behind after a 7-3 demolition of Aston Reserves. Five different goal
scorers combined to gift Royals the three points. Ollie Nolan and Luke Colville both scored
twice with Sam Taylor, Taylor Cooper and Richard Murphy all finding the net. Neil Cooley’s
brace and Jordan Saverton’s strike couldn’t stop Royals from winning.

Faringdon Town B finished their maiden season in style with a 5-0 win over Spartan Rangers
A. Tom Burdett and Brodie Mapletoft’s doubles put Faringdon well on the way to victory and
Tom Walsham’s goal finished off the scoring to cement a fourth placed finish for Faringdon.