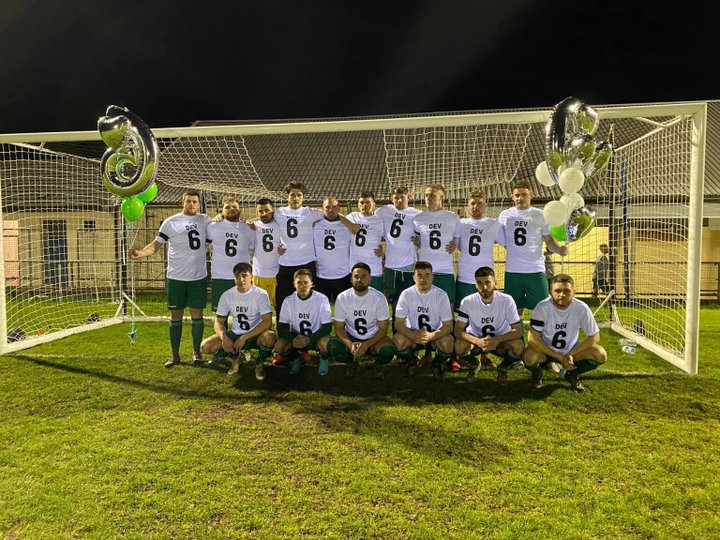 On Tuesday night, under the lights at Clanfield, Premier Division Enstone entertained
Division Three Faringdon Town A in the first of the Fred Ford Cup semi-finals. Faringdon
have been in fine form this year, securing the Division Three title earlier this month in their
first season in the Witney and District but it wouldn’t be rude to suggest that nearly all of the
200+ fans in attendance at Radcot Road were expecting a comfortable win for Premier
Division’s Enstone.
The fans were proven right early on, Nathan Bott scoring a screamer after just two minutes,
put Enstone into the lead and then on twenty-five minutes, doubled their lead when Bott
slotted home from the penalty spot. Faringdon weren’t about to go away though and Liam
O’Sullivan pulled one back on the stroke of half-time to halve the deficit.
The goal gave Faringdon all the momentum they needed and took control of the second
period. Faringdon’s increased possession and territory only served to rile up the Enstone
players as they lost their cool and saw Nathan Bott sent to the sin bin and Josh Hunt sent off
as their discipline crumbled. Faringdon had the chance to level from a penalty of their own
but the effort was put agonisingly wide of the left hand post and despite Faringdon throwing
everything they could at the Enstone goal, they couldn’t find a leveller to force extra time and
Enstone held on to advance to the final.

On Wednesday night we witnessed the amazing Witney and District family come together as
over 600 people piled into Kilkenny Lane to watch Hailey face Charlbury, Hailey’s first fixture
since the passing of Dev Wright. Dozens of family members, players from all three Hailey
sides and friends surrounded the centre circle as a minute’s applause was held before the
game. Green and white balloons filled the sky with the Hailey squad adorning white t-shirts
with Dev’s name and the number 6 written across it in the build up to the first whistle.
Hailey controlled the opening few minutes but couldn’t get a meaningful shot on goal but
Charlbury scored with their second attack of the game. A battle on the edge of the Hailey
box saw the ball poked out to the left hand side and the striker hit the ball low and hard
underneath Cody Davies to give Charlbury a tenth minute lead.
Hailey took control once again and managed to equalise just seven minutes later. A
delightful through ball from Cam Foster found Jordan Cormack’s well timed run and as the
Charlbury keeper advanced, Cormack calmly lifted it over him and into the empty net to
spark mass celebrations from the huge Hailey contingent.
It stayed level until the 31st minute. Charlbury once again bursting into the Hailey box, this
time the Charlbury player was fouled seven yards out and Craig McCallum stepped up to
send Davies the wrong way in the Hailey goal to give Charlbury the lead again. No further
clear cut chances came in the remaining time and Charlbury went in at the break ahead.
The second half turned into a goal fest. Hailey were level within seventy seconds of the
restart, high pressure and a willingness to win the ball back saw Hailey burst into the
Charlbury box and Nathan Kimber fired in low and hard to restore parity.
Charlbury took the lead for the third time in the game just seven minutes later. Davies
fumbled a corner and as the loose ball was hoisted towards goal, Craig McCallum stretched
out a leg to poke the ball home between to the two retreating defenders on the line.
Five minutes later and Hailey were level again. More fine work from Kimber down the left
created an angle for the shot only for an outstretched Charlbury leg to deflect it into the path
of Freddie Buckingham who slotted the ball past the stranded keeper.
The roaring support surged Hailey into another gear in the final twenty minutes and in the seventy second minute they finally took the lead for the first time. A foul on the edge of the
box saw Hailey earn a free kick and Nathan Kimber’s low curling left foot strike evaded
everyone and beat the keeper at the far post for a 4-3 lead.
Charlbury battled on in search of an equaliser but their race was run in the ninety second
minute, a foul in the box saw Hailey awarded their own penalty and Kimber completed his
hat-trick from twelve yards out to secure the win and to put Hailey in their second final of the
year.

Hailey staged their second come-from-behind victory in four days as they beat Hook Norton
at the Bourne. A cross wind made kicking and defending difficult and all three goals came
from corners during the game. Hailey had the better of the opening exchanges with Jordan
Cormack, Tom Gregory and Jack Wood all missing opportunities to score the opening goal.
Instead it was Jay Mair who gave Hooky the lead, against the run of play. In their first corner
of the game, Mair was able to steal in unmarked and fire a header home from twelve yards
out. Hooky were able to hold out until the 44th minute when Dan Bott unfortunately headed
into his own net following another corner.
The second half followed a similar pattern with the ball spending more time in midfield.
Hailey threatened to break with the pace of Joey Aust and Nathan Kimber but could never
find the quality in the final third to create a chance of note. Hailey did finally manage to
create an opening, this time Jack Wood went unmarked in practically the same spot that
Mair had scored from in the first half and powered a header home. Hailey survived a long
ball barrage for the last ten minutes with relative ease and saw out the game to maintain
their one point lead at the top. Hailey can win the league on the 9th April when they visit
Carterton FC Rangers.

Hanborough ensured that the title fight did go on for a couple more weeks as they found
form in front of goal again, delivering a 5-0 thrashing of Charlbury Town. A much stronger
Boro line up played out their final home game of the season with style, Arran Hobley scored
for the second game running as he scored twice, with further goals coming from Craig
Johnson, Craig Mays and Jack Morton as Hanborough secured second spot, at least, in their
first season back in the Witney and District

In the battle of the other two sides in the top four, Enstone utilised home advantage to inflict
defeat on Stonesfield. Carry Rice scored for Stonesfield but goals from Jordan Godfrey,
Jamie Gregory and Nathan Bott gave Enstone the points to give them a shot of finishing
third this season.

Minster Lovell continue to fight for the Division One title with a 2-0 win over Bletchington.
Goals from Rui Alves and Alex Stubbs maintained their one point advantage over Freeland.
Freeland were awarded a walkover victory against Wootton Sports. They still have two
games in hand to overhaul Minster at the top of the league.

Combe were awarded a walkover victory against Ducklington

Chadlington Reserves were awarded a walkover victory against FC Mills

Witney Royals Reserves beat Freeland Reserves in the battle for promotion as they jumped
into second place in their final game of the season. Royals raced into a 2-0 lead thanks to a
goal each from Kyle Grimmett and Ollie Nolan and held onto until the break. Freeland
bounced back in the second half, a fantastic goal from Jerome Carbon halving the deficit as
Freeland pushed hard for the point that would guarantee them second spot in the league.
Royals held firm against waves of Freeland attacks and finally secured the points with
Grimmet’s second goal of the game as Royals won 3-1. Freeland play Aston in their final
league game on the 9th April where victory will assure them of second place but anything
less will keep Royals in second spot.
Stonesfield Sports Reserves beat Carterton Town FC in Carterton Town’s final league game.
Sadly the defeat means that Carterton finish the season without a league victory and finish
bottom of Division Four. Top scorer Tyler Webster did get Carterton on the scoresheet but
goals from Tom Wilson, Ethan Holloway and James Lloyd gave Stonesfield the 3-1 win. The
two sides meet again next week in the second round of the Supplementary Cup.
Neil Cooley’s hat-trick helped Aston Reserves defeat Sherborne Harriers 4-1. Toby Larking
scored Sherborne’s consolation goal but Nick Angus’ goal secured all three points for the
away side.
Supplementary Cup 1st Round
Hailey A are through to the second round of the Supplementary Cup after a 4-1 win over
Leafield FC. Markus Vinicius scored Leafield’s goal but an Ian Wright double put Hailey in
control and further goals from Sam Wright and Craig Greenhalgh cemented the victory.
Hailey can look forward to a visit to Division Four champions Hatherop Reserves in the
second round.