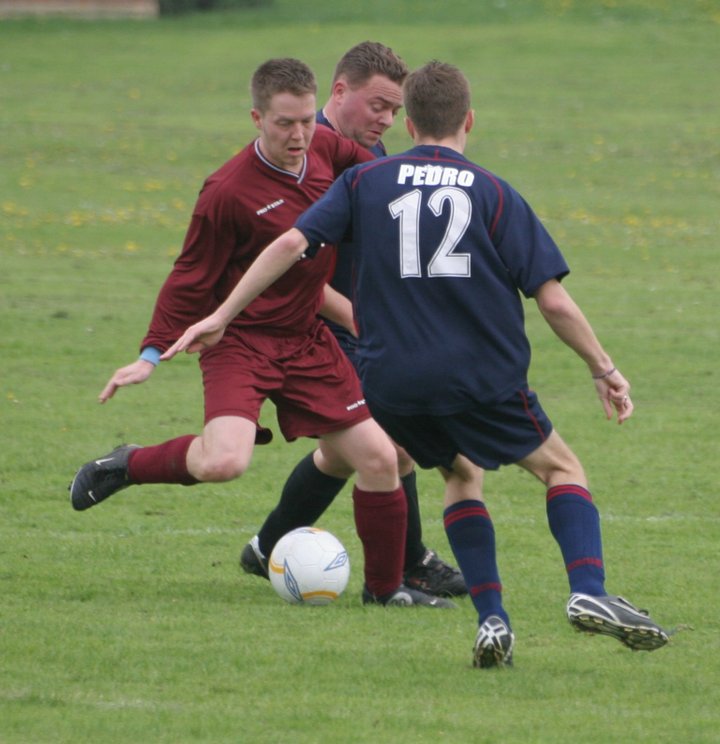 Premier Division
Carterton FC amassed seven different goal scorers as they stormed to the top of the Premier Division with a 7-0 victory over Charlbury Town. Whilst Charlbury battled hard throughout they proved to be no match for their free scoring opponents. Craig Mays scored his third goal of the season to put himself joint top of the goal scoring charts.

Minster Lovell kept tabs on the leaders with victory away at Carterton Town A. Mykel Ryan scored for the second game in a row for Minster, only for Luke Vincent to score for Town. Mark Norridge and Dean Woolgar pushed Minster onto victory though and preserved their 100% record.

Spartan Rangers and Tower Hill both managed to bounce back from opening day defeats to record their first wins of the season. Spartan utilised home advantage to beat bottom side Milton 3-0. Frank Clarke, Luke Pettifer and Tom Williams all got their names on the scoresheet and condemned Milton to their second defeat in a row.

It was a tighter contest in the game between Tower Hill and Stonesfield as both sides hunted their first win of the season. Stonesfield took the lead through Ollie Wynn but Tower Hill fought back with James Scott restoring parity in the game before Jamie Harris’ goal settled the tie in the home sides favour in a 2-1 victory.

Carterton Rangers and Enstone managed to cancel each other out and recorded the first draw in the Premier Division this season. Unfortunately for Rangers they were responsible for the ball ending up in both nets. Steve Murphy scored at the right end for Rangers only for an own goal to bring Enstone level and that’s how the game finished.

Division One
Jay Mair continues to be a nightmare for Division One defenders and goalkeepers alike as he scored a hat-trick to help Hook Norton thrash Spartan Rangers Reserves to go top of the table. The hat-trick means that Jay has now passed the 50 league goal marker for Hook Norton, in just 33 league games. He wasn’t alone on the scoresheet as Josh Hunt bagged a brace for the second game in a row, whilst Adam Hemmings and Dave Hayward took Hooky’s tally to seven. Josh Walkington grabbed a scant consolation for Rangers but it finished 7-1

Chris Laurence also got in on the hat-trick scoring act as he fired 10 man Bampton United to victory. Lloyd Hancock saw red for two bookable offences but that couldn’t prevent Bampton from beating Witney Royals. Laurence scored all of Bampton’s goals in the 3-1 win. Kieran Colwell replied for Royals.

Jarvis Morley and Ethan Bennett both scored for the second game in a row to help Chadlington record their second win of the season. It was a much tighter affair this week in the game against Hailey Reserves, as Chadlington won 2-1. Sam Wright scoring Hailey’s response but it wasn’t enough to take anything from the game.

Bletchington recovered from their opening day defeat with victory over Kingham All Blacks. A rapid start saw Bletch take the lead inside six minutes, through Jamie Hudson and as they controlled the opening quarter of the game they extended their lead to two after Jonny Boyes’ strike. A disallowed goal for handball stopped it being three for Bletch and for the rest of the half Kingham controlled the game, Dan Lay reducing the deficit to one before the break. Lay then pinched the ball off Bletch right at the start of the second half, dribbled his way past 4 players to put himself one-on-one with the keeper, only to poke wide in the important moment.

A back and forth twenty minutes was calmed by Tom Knox restoring the two goal advantage with a low thumping shot which crept under the Kingham keeper’s body. Bletch saved the best until last after some neat football through the middle of the park, Michael Trafford chested the ball into the path of Jamie Hudson who fired a rocket into the net, leaving the keeper stranded. It wasn’t the end of the drama, as Kingham forced two fine saves and a goal line clearance in the final quarter but Bletch held on for victory.

Wootton Sports also scored four as they won on their first outing of the season. They visited Brize as they played out an entertaining six goal game, Wootton winning 4-2. Jamie Hutton and Karl Guschtscha got the ball rolling for Wootton before Scott Peaper got one back for Brize. Karl Ware scored again for Wootton before Joe Henry pulled another goal back for Brize before Callum Flannery secured the points for Wootton.

Division Two
Cassington Rangers were awarded two penalties and saw opponents Carterton Town B reduced to 10 men in their encounter at the weekend. In an incident packed opening quarter, Jason Blackman scored twice from the spot to give Cassington the advantage. In between the penalties, Carterton were reduced to 10 men after a professional foul.

Despite being a man down, Carterton missed a number of decent chances but they were undone on the stroke of half-time after Cassington broke away following a Carterton corner and Jason Blackman lobbed the onrushing Carterton keeper to complete his hat-trick and become the current Witney and District top-scorer. Shaun Rowbotham added a fourth before Billy O’Brien pulled one back for Carterton. Josh Clarke fired a fifth to cement victory and kept Cassington top in the process.

Aston and Ducklington both recorded 3-0 victories to secure their second wins of the season.
Olly Hawkins found the net twice for Aston as they beat Bourton Rovers 3-0. Aaron Robins hit the net for a second consecutive game to earn Aston all three points.

Ducklington hosted Chadlington Reserves and won by the same score line. Charlie Fisher scored for Ducklington before Sam Doherty bagged a brace for the home side for a fairly comfortable victory.
It appeared to be a week for consecutive victories as Eynsham and Combe both secured their second wins of the season, both winning by a single goal.

Stephen Chappel scored for the second week running to grab the only goal of the game in a tightly fought encounter with FC Ascott Rangers.

Meanwhile, Combe defeated Milton Reserves but needed two goals to do so. Martin Kraus scored for Milton as they hoped to record a second victory of their own but they were undone by Louis Beresford and Rory Ward goals as Combe left with all three points after a 2-1 win.

Siege and Wootton Sports Reserves faced off both looking for a change in fortune after losses on the opening weekend. Siege went ahead thanks to Andy Makepiece’s goal and doubled their advantage when Jordan Finnemore found the net. James Minchin pulled one back for Wootton but Siege pulled away thanks to a Benjy Stephens double as Siege won 4-1.

Division Three
Spartan Rangers A are surely fed up of facing Kingham All Blacks Reserves as they lost for the ninth time in a row against their bogey team. Not even a momentous Ant Barlow goal could stop Spartan from another defeat. Instead Kingham roared on to victories thanks to two goals each from Ben Newton and George Warren as Kingham secured a 4-1 victory.

Hailey A were also in a goal scoring mood as they won 4-1 too. Curtis Hathaway and Ryan Stockford (2) both scored for the second week running to take both of their goal scoring records to 3 for the season. Karl Smith added the fourth for his first goal of the season. Ian Barrett replied for Witney Royals Reserves but it had no impact on the result. Hailey stay second as a result.

Dan Hedges is the leading scorer in the Division Three charts after scoring another brace in another FC Mills victory, this time against Sherbourne Harriers. Josh Betteridge opened his account for the season from the penalty spot but Darren Smith added a third for Mills who stay top by virtue of alphabetical order of team name.

Bampton United Reserves were the biggest winners in the division this week after putting five past FC Ascott Rangers, without reply. Lewis Townsend and Seb White both scored twice for the home team, with Josh White firing home a fifth to get Bampton’s season off to a great start.

Despite six goals being scored, nothing could be done to separate Stonesfield Reserves and Brize Norton Reserves in a thrilling 3-3 draw. Three times Brize took the lead only to be pegged back each time by a battling Stonesfield side. Richard Duffy, Joe Hatt and Lee Litton hit the net for Brize but Sam Hibberd and Tom Wilson’s brace was enough to earn a point for the hosts.