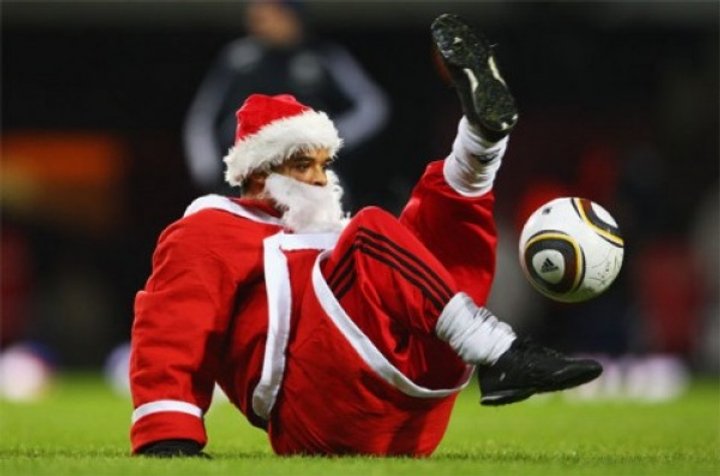 Premier Division
Alex Stubbs scored once again as Carterton maintained their 100% start to the season going into the Christmas break. Following on from his impressive brace last week, Stubbs once again rose to the challenge to help Carterton break down a stubborn Spartan Rangers side. Mark Threlfall hit goal number five for the season, this one from the spot, to give Carterton a 2-0 win.

Hailey’s match against Enstone had to be abandoned after 75 minutes. Hailey have fallen six points behind Carterton now, but have two important games in hand. Enstone remain fourth.

Unsurprisingly, the game at Wash Meadow was a wash out as the rain prevented any action in the game between Minster Lovell and Tower Hill

Division One
Only two games were able to be played in Division One. Witney Royals remain in third place after thrashing Spartan Rangers Reserves. Royals recovered nicely from their defeat to Bampton last weekend by putting seven past their hosts. Corey Donohoe, Reuben Wertheim and Miles Roberts all scored for Royals but Spartan hit back through Fabio Fernandes and Josh Walkington who both scored once each.

Royals were able to wrangle control back in their favour thanks to a brace apiece from Ryan Harris and Jordan Pratt and the score finished 7-2. Spartan remain second bottom after their fifth defeat of the season.

Chris Laurence scored for the third game in a row to help guide Bampton United to victory over bottom side Brize Norton. Brize battled hard and levelled through Jake Farrugia but Bampton pushed on for the win and Jake Pritchard was able to slot home to secure the three points. Bampton jump one place to fourth, level on points with Royals above them.

Division Two
Four of the top five teams all dropped points in Division Two as things got a little tighter at the top after an eventful weekend of fixtures.

Milton Reserves visited top side Eynsham SSC and couldn’t have made a worse start after seeing Toby Harrison-Turner get sent off after just 15 minutes, leaving them with ten men for the remainder of the game. Eynsham made their numerical advantage count as they scored from the spot thanks to Stephen Chappell, Adam Drhouri doubling their advantage. But Milton were not to be deterred and hit back through goal machine Dan Hooton. Harry Nolan scored his first of the game to bring things level and Milton had the lead as Nolan slotted home his second of the game.

Incredibly, Milton then went 4-2 up as Hooton grabbed his second of the game. Eynsham are top for a reason though and found an energy boost of their own against the tiring legs of their disadvantaged opponents. Their own goal machine, John Ayres, hit two of his own to restore parity and in the last ten minutes Eynsham had the lead for the second time as Jack Knight gave them a 5-4 lead. The minutes ticked by and just as Eynsham could smell victory, Dan Hooton completed his hat-trick in the 90th minute to rescue a point for Milton.

Second place Combe played third place Ducklington but neither side were able to capitalise on Eynsham’s slip up as they cancelled each other out in a 1-1 draw. It was a day to forget for Josh Hartley as he put the ball into the back of his own net, to give Combe the lead. Ducklington then found themselves a man short as Hartley then got sent off, leaving Ducklington with a real challenge on their hands. But Tom Costley, guilty of scoring at the wrong end last week, stepped up after a late penalty was awarded to the home side and he calmly slotted the ball home to leave honours even at Glebelands.

Siege were the beneficiaries of their rivals inability to win as they jumped from sixth to fourth as they beat Cassington Rangers. There was just as much drama at Carterton Rec as Andy Makepiece was sent off for protesting too fiercely in the event of a disallowed goal. Siege had put the ball in the back of the net but the referee saw differently and disallowed the effort. From there Makepiece talked himself into the book and saw red to leave Siege a man short. However, it was Siege who battled hardest and walked away with the three points. Darren Cartwright opened the scoring after Siege were awarded a penalty and his second goal of the game earned all three points for the home team. They find themselves just four points off the top of the table.

Carterton Town B recorded just their second league win of the season as they upset fifth placed Aston. A scrappy game saw both sides struggle to test the keepers in the opening 30 minutes but when Dave Wanless was played through, he beat the keeper to the ball and was then taken out, leaving the referee with no other choice than to point to the spot. Maahir Alam calmly firing home from twelve yards out. And it was two before the break as Maahir fired home his second. Good work on the left from Nathan Nyenga saw the ball reach the box and Maahir was on hand to slot home past the stranded keeper.

Aston halved the deficit in the second half after a defensive mix up in the Carterton defence. Charlie Harper sneaking in to fire home to give Aston renewed hope. Despite their best efforts, it was to be Town who would stretch their advantage rather than crumble under the pressure. As they executed a high press, they pinched the ball off the Aston back four and Dan Chillington sumptuously lobbed the Aston keeper from 25 yards out to give some breathing space.

Aston did their best to get back into it and almost did, forcing a smart one handed save from the Carterton keeper. It proved clinical to the outcome of the game as Carterton broke up the other end immediately from the save and Tahir Alam slotted home goal number four and the win.
North Leigh hosting Bourton and Wootton Reserves against FC Ascott Rangers were both postponed.

Division Three
Hailey A have a three point advantage at the top of the league after defeating third placed FC Mills in close fought contest. Mills’ second top of the table clash in two weeks saw them start brightly but were undone by a Will Jeffrey strike on his debut to give Hailey the lead. Mills were able to hit back through Aaron French but Hailey made it seven wins from seven thanks to Ryan Stockford’s 14th goal of the season.

Brize Reserves made it three wins in three since the restart with a 7-0 demolition of Aston Reserves. Joe Hatt and Paul Morrison both shared the limelight as they both hit hat-tricks with Lee Litton firing home goal number seven. The win takes Brize fourth. Aston stay bottom.

Eight goals were scored in a fiery game at Burwell Meadow between Witney Royals Reserves and Bampton Reserves. It was a game which Royals dominated but could never completely shake a determined Bampton side. Royals were ahead in the first half thanks to a Josh Taylor goal. The advantage was doubled when Ben Horne got his first of the afternoon and Stuart George made it 3-0. Bampton fought back with a goal from Gary Mitchell, only for Horne to restore the 3 goal cushion. Lewis Townsend made it 4-2, with Kris Collis making it 4-3 as Bampton continued to fight. Stuart George eventually scoring goal number five for Royals. There was enough time for a mass brawl in the final minutes which saw cautions given by the referee but there were no further goals and Royals jump up to sixth place, just one place below their opponents.

Spartan Rangers A recorded their first away win of the season after coming out on top in a six goal thriller against Sherborne Harriers. In a back and forth encounter, Spartan A raced into a two goal lead thanks to James Macke and James Tudge goals. Sherborne hit back through Andy Barnes but Spartan went further ahead thanks to Mike Hole. Darren Bartlett reduced the gap once again but Macke popped in his second for the 4-2 win.

FC Ascott Rangers Reserves against Hook Norton Reserves was postponed because of a positive Covid test in the Hook Norton camp.