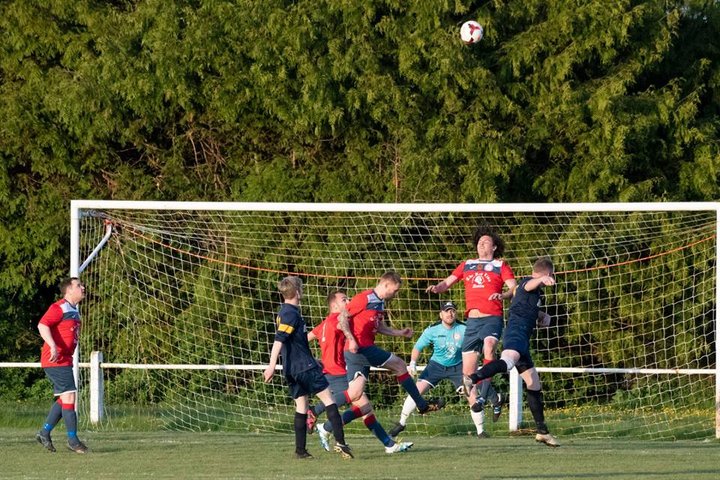 Jack Wood fired home two goals as Hailey put four past Tower Hill to remain top of the Premier Division. Nathan Kimber and Tom Gregory also scored for the second week in a row in helping Hailey to a 4-1 triumph. Jesse Lawrence pulled one back for Tower Hill.
Carterton FC and Spartan Rangers both made it two wins from two after defeating Milton and Carterton Rangers respectively.
Carterton hosted Milton, with the away side scoring through Dan Hooton. Carterton fired back thanks to Mark Threlfall and Dan Bishop to put them on six points from their first two games with the 2-1 win.
Spartan Rangers, who only won three times in the entirety of last year’s league campaign, recorded back to back wins by beating Carterton Rangers by the same score line.
David Pryse and Harry Thompson both scored to give Spartan all three points. Liam Day responded for Carterton Rangers but Spartan saw the game out to grab the win.
Minster Lovell bounced back from their defeat last week by overcoming Carterton Town A 3-0.
Sam Wright scored for the second week running and, along with Ryan Stockford’s double, the Minster men grabbed their first win of the season.

Division One
Reece Bayliss scored four times to maintain Enstone’s impressive start to the season. KIngham All Blacks, their opponents, had no answer for Enstone’s scoring prowess and with Nathan Bott scoring two and Kieran Watts adding his name to the score sheet, Enstone hit seven before the game was out. Dan Davies scored the sole consolation for Kingham in the 7-1 reverse.
There were goal line clearances and Chadlington missed a penalty as they succumbed to defeat against Bourton Rovers. Adam Webley proved to be decisive enough in front of goal as he bagged a brace to give Bourton a 2-0 victory.
Hailey Reserves also recorded a 2-0 victory in their away victory over Middle Barton. Mark Orpwood and Darren Tasker both popped up with a goal as Hailey Reserves got their first win of the season.
Bampton United and Minster Lovell Reserves cancelled each other out as the equally shared four goals. Jordan Day and Ryan Hewer scored for home side Bampton but the away side hit back through Seb White and Harry Puffitt to give both sides a share of the spoils.

Division Two
The battle of two early season title contenders proved to be a closely fought game as Siege FC and Carterton Reserves faced off against each other. Jake Godfrey scored for Siege but John Andrews and Danny Brearley popped up with a goal each to settle things in favour of Carterton Reserves.
Eynsham SSC recorded their first win of the season after defeating Carterton Town B 2-1. Tim Hayward scored for last season’s Division Two champions but Andy Stratford and John Ayres scored to give Eynsham three points.
Charlbury Town Reserves and Wootton Sports couldn’t be separated in their 90 minute tussle. It finished 1-1. The draw moving Wootton up to second in the league.

Division Three
Nick Angus scored a screamer to set Aston on the way to victory against Bourton Rovers Reserves. Angus, promptly followed his super strike with a second to give Aston some daylight. Bourton, took hold of the game and put Aston under lots of pressure but Aston’s defences held firm until the last few minutes when Dalton Cooper pulled one back. It proved to be too little too late and Aston held on for the 2-1 win.
Stonesfield Reserves took advantage of their first team not having a game to field a strong side when visiting FC Mills. Raffy Rice, a regular first teamer, slotted home from the penalty spot with Shaun Kemp and Lewis Day also scoring. Liam Harris finished off the scoring with a double as Aaron French scored a solitary consolation for FC Mills as it finished 5-1 to the visitors.
It was a game for the defenders as Wootton Reserves and Chadlington Reserves faced off in a very close contest. Both sides had opportunities and Chadlington, in particular, will be indebted to their keeper for pulling off a magnificent save in each half to keep the game at nil-nil. It took until the 89th minute for the deadlock to be broken and Rocky Burton found himself in the right place at the right time as the ball fell to him in the box and he toe poked the ball past the keeper to give Chad all three points.

Division Four
Max Sauvagnargues scored a hat-trick to fire Milton Reserves to victory over East Oxford Rangers. Gareth James pulled one back for East Oxford Rangers but Martin Kraus added a fourth to give Milton a 4-1 win.
Ethan Barret was another Division Four hat-trick hero as he helped inspire Spartan Rangers A to victory in their game against Bampton United Reserves. Jordan Day and Harry Heritage scored a goal each to bring the game to within one goal but Spartan held on for all three points.
Hailey A suffered their first defeat since joining the league this year. Moh Semlali scored for Hailey for the second game running but Hayden Parker scored a brace for Brize Norton Reserves to give them their first win of the season.