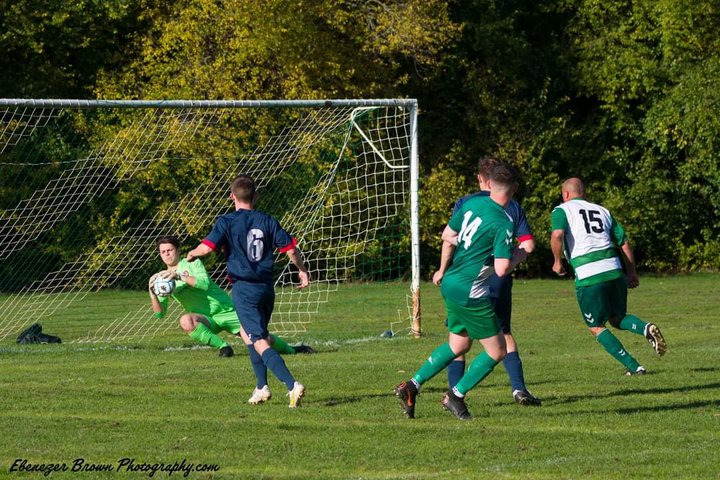 Last season’s Division One champions Freeland have enjoyed an animated start to life in the Premier Division and recorded their first league win of the season, at the expense of Spartan Rangers.
Having already faced the top two sides from last season in Enstone and Hailey, producing a brilliant display to take points off the defending champions, they rattled in three goals this week to earn their first three point haul.
Damon Tolley, Connor Allmond and Ethan Simlett all scored for Freeland, Charlie McCulloch scored Spartan’s reply in the 3-1 reverse.

Hailey also got their first win of the season, dispatching previously unbeaten Milton away from home. Sam Wright and Robert James had Milton well in the game but Nathan Kimber’s double plus further goals from Freddie Buckingham, Sam Wheeler and Jack Wood gave Hailey a comfortable win.

One remaining fixture from the Junior Shield competition. In an all Witney and District affair, Premier Division Hanborough saw off Division Two Bampton to progress to round two. A rapid first half start from Hanborough saw them 4-0 up after just fifteen minutes. Bampton scored an own goal from a corner after four minutes, Josh Brookes’ doubled their lead on eight minutes with a deflected volley. Dan Haggie made it three on eleven minutes and Chris Bateson scored his first goal for the club on fourteen minutes. A much changed eleven in the second half still maintained control of the game and Brookes got his second on the hour mark to polish off a resounding 5-0 victory.

Division One
An eleven goal thriller at Middletown saw Hailey Reserves narrowly beaten by Carterton FC as the latter jumped up to the top of Division One. There were goals aplenty in a back and forth match. Gary Mitchell, Mo Semlali and Seb White all scored for the home team, with Zac Sheffield, Nathan Walton and Jack Bellenger all responding for Carterton. Karl Smith scored a brace to give Hailey hopes of all three points but Conner Townsend’s hat-trick stole the show and the points, inflicting a second league defeat on Hailey.

RAF Brize Norton dropped points but remained second as they managed a 2-2 draw at home to Aston. Mark Williams’ third goal of the season and a strike from Mike Flavell put the home side on top but Luke Beauchamp’s double earned a point for Aston.
New boys Heyford Athletic are still looking for their first win, going down 3-1 to Tower Hill. Steve Roberts scored for Heyford but Jack Scott’s brace and a Jamie Harris effort were enough to send the points to Tower Hill.

Faringdon Town Development and Witney Royals shared six goals in a draw that did neither side a favour at this early point of the season. Both sides were searching for their first league wins of the season. Tom Fenwick scored twice for Faringdon but was matched in the goal scoring department by Corey Donohoe. Alistair Eccleston and Jack Allen traded single goals for their respective teams in a 3-3 draw. The point lifts Royals above Heyford into tenth, Faringdon stay rooted to the bottom of the table.

Ducklington and Chadlington also couldn’t be separated in their 1-1 draw. Rocky Burton scored for the second week in a row for Chadlington, Dwayne John replied for Ducklington.

A second half goal blitz saw Hatherop Reserves steal victory from the jaws of defeat against Witney Royals Reserves. It was only 1-1 at half-time. Richard Stearn bundled home from a corner for Hatherop before Ollie Nolan equalised shortly before half-time.
The second half started frantically. There wasn’t even ten seconds on the clock when Nathan Harris shot from inside his own half straight from kick off and then watched as the ball spilled over the keeper and into the empty net. Royals were then reduced to ten men for a sin bin but rather than let that perturb them, they extended their lead. Harris’ second goal of the game coming on 54 minutes, a shot from the edge of the box, which again, spilled over the keeper and into the empty net.
For the remaining thirty minutes it was pretty much one-way traffic. Alex Anderson scored to reduce the deficit to one before Fabian Daniels swivelled and volleyed home from inside the box to restore parity. With fifteen minutes to go, Daniels was felled in the box and despite a brilliant save from the original penalty, Troy Weaven put away his own rebound. Into the final ten minutes and Hatherop substitutions were beginning to make a mark. Jimmy Whiteman’s weaving run and shot found the bottom corner for 5-3 and all that was left was Daniels’ fine lob and calm finish to end the scoring and give Hatherop all three points.

Brize Norton are hot on the heels of the top three with a hard earned win away at Hailey A. Despite Curtis Hathaway’s goal for the hosts, Brize took all three points thanks to goals from Adam Davis, Matthew Webster and Dylan Briggs in a 3-1 win.

Kingham moved to the top of the league with a walkover win against Faringdon A.

Wootton managed seven without reply as Asha Townsend bagged six goals to extend his lead at the top of the Division Three goal scoring charts, his total now thirteen for the season. Erling Haaland will be searching for the Wootton Youtube channel to find out how he can improve his goals to game ratio to the same level as Asha’s. Michael Steers scored number seven in the rout as Wootton moved back to the top of the league.

In a much tighter affair FC Mills maintained their 100% start to the season with a 4-3 win over Tower Hill Reserves. Dean Mays and Ethan Phillips traded doubles for each team, Josh Hartley scoring a third for Tower Hill. But goals from Benjamin Thomson and James Morgan stole the points for Mills to carry on their superb early season momentum.

Carterton Town didn’t win a single league game last season but have broken that record inside four league games this season with an incredible 4-3 victory over Aston Reserves. Neil Cooley and Reece Waine’s brace would have Aston hoping for at least a point but Frank Mayne scored a double of his own for Town and further goals from Darren Light and Tyler Webster snatched all three points for Carterton.

Just the three goals for Stonesfield Reserves but a win nonetheless as they saw off Sherborne Harriers. Eden Rice, Jacob Oliver and Dan Taylor all scored in the 3-0 win.

 Week 7 Football Report Superb Stonesfield Carry on to next round