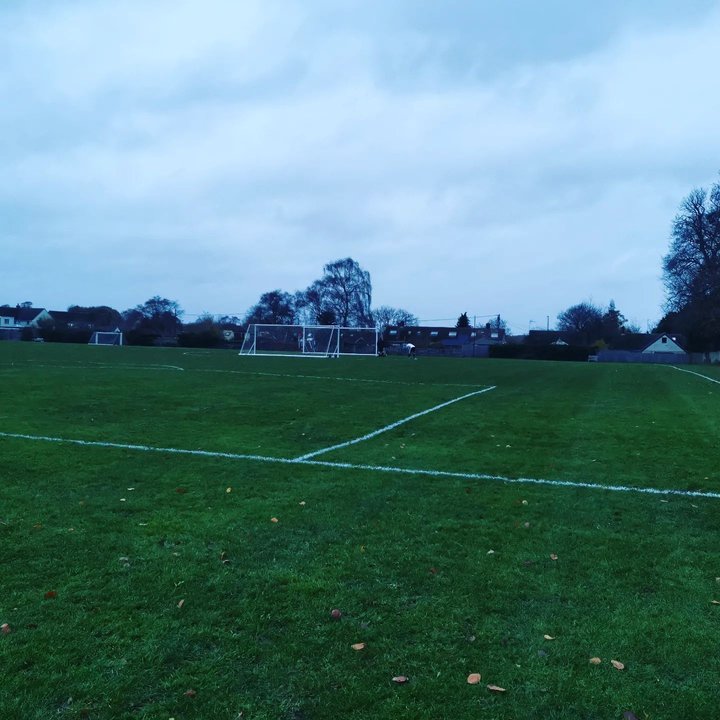 Sean King and Freddie BucKINGham both scored twice as the battle between first and second in the premier division turned into a one sided drubbing. Hailey’s midfield ran the show in a 6-1 victory over Enstone as they recorded their fifth straight league win. Jordan Cormack and Sam Wheeler added the extra’s to top off a near perfect afternoon for the visitors. Enstone’s consolation was from Jay Mair who still tops the goal scoring charts with his ninth of the season but Hailey are now firmly in control of the premier division title race.

Hanborough vs Minster Lovell (from Hanborough Facebook page)
Another week, and yet more selection problems with Reece Deasy joining the list of injured players after his ankle injury last week, Luke Pettifer unavailable due to Butlins and Craig Johnson out due to life. It was a busy week for gaffer Chris Doyle in the transfer market as we managed to get Charlie Kai May, Adam Izzard, and Craig Mays signed in time to be a part of the squad. Credit to groundsman John Ostojack as the pitch look perfect despite the rain we have had.
The game itself was a very odd one, with Minster holding mist of the possession and in truth looking the better side but the clear chances were created by Hanborough throughout. Craig Mays being denied by the Minster Keeper as early as the 2nd minute from point blank range, then his strike crashed against the bar, then after a delightful cross from Hobley Mays headed narrowly over. The break through goal came when Nick Manifold jinked into the box and slotted home for his first Hanborough goal. The lead lasted only 3 minutes when after a fantastic save from Bennington tipping over the bar, the resulting corner was headed home from an unmarked Dan Brearley.
Half time - Hanborough 1:1 Minster
The second half and Minster had even more of the ball and were certainly dominating the midfield battle with Mark Threlfell and Rory Linford-Pill running the show but Hanboroughs defence of Bateson Trinder Haggie and Hobley were standing strong and Minster were not really creating anything of note despite their dominance, Hanborough on the counter attack another story, Mays was denied after a great ball and an even better first Touch by the resolute Mazur in the Minster goal, Manifolds shot was heading into the net but an outstretched arm blocked the shot. Penalty smashed home by Dan Haggie and Boros lead was restored, minutes later Alan Rogers cross was heading to Mays only to be blocked again by an outstretched arm this time though nothing given. Manifold then jinked into the box, clear trip but due to him trying to stay on his feet amazingly again nothing given. Penalised for his honesty was the cry. With time ticking out Mark Threlfell fired a free kick into the corner of the net and the game ended 2:2. A great entertaining game for both with both sides coming away probably thinking they should have won it. Well reffed as ever by Stephen Bryce.

Wins are like buses for Heyford Athletic it would seem. Waiting all season for one and then two come along at once. After last week’s convincing win over Hailey Reserves, they took home all three points this week at the expense of Ducklington, with another comfortable victory. Connor Duggan followed up from his hat-trick last week with another two this week. Charlie Fisher scored for Ducklington but Jack Campbell, Robert Gosling and Adam Phillip goals fired Heyford to consecutive wins and jumped all the way to seventh in the table after starting the day second bottom.

Hatherop missed a chance to move top after dropping points against mid table Chadlington. Ollie Taylor, John Watson and Charlie Bailey all scored one each for Hatherop but Chadlington stole a share of the points with a Sam Lewis goal and an Ethan Bennett double in an entertaining 3-3 draw. The result capped a miserable week for Hatherop who were also docked points for fielding an ineligible player against Aston 2 weeks ago.

Aston jumped up to second without kicking a ball as they received a walkover victory against Combe. Combe’s inability to field a side means they are now bottom of the league, although the bottom 6 are separated by just three points.

Carterton are the new league leaders after a 4-2 win over Witney Royals. Jack Bellenger scored two as he moved to the top of the goal scoring charts in division one, now on nine for the season. Elliot Major and Kyle Grimmett scored for Royals but Liam Felstead’s first goal of the season and Jay Revill’s strike secured all three points for Carterton.

In the final fixture in the second round of the Fred Ford Cup, Faringdon Town Development of division one saw off division two’s Eynsham SSC. Ben Oates gave Eynsham hopes of an upset but Chris Rutt’s double put Faringdon into round three where they’ll face Siege FC.

Cassington Rangers and Brize Norton managed to extend their lead at the top to seven points after a positive weekend of results for them. Cassington remain top after a second half hat-trick from Tyler Walker rescued three points against a stubborn Leafield side. Leafield started the game with ten men but their spirit was more than a match for Cassington as they enjoyed the better of the opening phases. They weren’t phased by Josh Clarke’s opener and were level through Ronan Doherty’s goal before they eventually put eleven players on the pitch and got to the break level. Cue Walker’s second half show stealer as he grabbed all three points for the visitors to ensure that Cassington stay top on goal difference, just!

Brize closed the goal difference gap considerably though as they dished out a 9-2 thrashing of third place Witney Royals Reserves. Jacob Hambridge’s second hat-trick of the season took his tally to four for November as he got Brize marching towards victory. Three other players all scored twice as Cameron West, Joe Hatt and Dylan Briggs helped put another six past Royals. Rob DeBanks and Dan Milner put a little bit of pride in the score line for Royals at least.

There were three good wins for sides in mid table positions as they increased the gap between themselves and the bottom five. Kingham remain seventh after a single goal gave them victory over bottom side Spartan Rangers Reserves. In the cruellest of circumstances, Spartan turned the ball into their own net to subject them to an eighth defeat of the season.

Hatherop remain eighth after also recording a victory by a single goal. They did at least have their own player to thank as Jimmy Whiteman scored the only goal of the game in a 1-0 win over Freeland Reserves.

It was slightly more comfortable for Siege FC as they beat Hailey A. Jonny Dover scored for the second week in a row and a Gez Morgan penalty was enough to take all three points in a 2-0 win and remain ninth.

The top three sides all dropped points this weekend as division three got even more exciting in the countdown to the winter break.

Wootton missed the chance to take advantage of Chadlington’s slip by succumbing to a 4-1 defeat against Deer Park Rangers, who took advantage of injury time in both halves to run away with the win. A tough and attritional game saw the ball spend most of the time in the middle of the park but Rangers broke the deadlock on 13 minutes when Chris Godfrey fired home from the edge of the box. There were no other significant chances or saves in the next thirty minutes as both sides failed to dominate for but as the clock ticked towards 45, Rangers doubled their lead through Cullen Angus and they were three up by half time as Godfrey scrambled the ball home from a corner for his second of the game during added on time. Wootton came out with renewed vigour in the second period and peppered the Rangers box with keeper Harry Thompson the busier of the two number one’s and the pressure paid off as Sancho Reiss, possibly the shortest man on the pitch, stole in at the back post to head home to get Wootton back in the game. Shortly after Rangers were awarded a spot kick for an unfortunate handball, however, Angus missed the chance to get his second of the game as his strike cannoned back off the post. Wootton used the lifeline to pursue their second of the game, forcing Thompson into a couple more good saves. As time wore on, Wootton got higher and higher up the pitch and as the clock ticked past ninety, Rangers broke down the right hand side and the squared ball found Harry Edwards all by himself who found the back of the net with ease to guarantee all three points.

Yarnton also dropped points but found themselves top anyway by virtue of Chadlington and Wootton’s adverse results. Their 2-2 draw with fourth placed Stonesfield Reserves was an excellent point on paper, given Stonesfield were responsible for Yarnton’s first league defeat last month. Michael Trafford and Mark Harris’ goals for Yarnton were cancelled out by Jayson Chappell and Jacob Oliver’s goals for Stonesfield in a 2-2 draw. Yarnton are now top on goal difference, Stonesfield slip to fifth.

Leafield Reserves beat Aston Reserves to put themselves four points ahead of the bottom three. Aaron Robins and Neil Cooley scored for Aston but Leafield went one better thanks to Handson Coston, Osni Figueiredo and Antonio Silva.

Carterton Town exacted revenge over Sherborne Harriers with just their second league win of the season. Carterton narrowly missed out to Sherborne last week in the Jack Busby cup but grabbed a 2-1 win to move off the bottom of the league. A Sherborne own goal got Carterton going but Josh Betteridge’s strike cancelled that out. Brian King came off the bench for Carterton and grabbed the winner to move Carterton up one place to eleventh.

Kingham Reserves secured the biggest win in division three with a 6-2 win over Eynsham Reserves. Dale Norris and Ellis Godin both scored twice each as Kingham found the net with regularity. Leuan Owen and Jack Morgan scored for Eynsham but Adrian Williams and Jake Godfrey’s goals keep Kingham seventh but are only five points off the top. Eynsham’s defeat, coupled with Carterton’s win mean that Eynsham enter December bottom of the league.