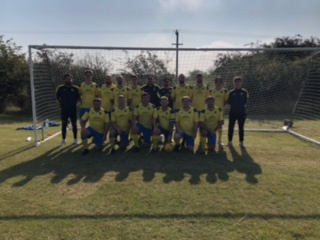 There were 2 first round ties carried over from last week. Two division 3 sides were in action as Eynsham SSC hosted FC Mills. The sides played out a thrilling 4 all draw and with extra time unable to settle them, the match went to a penalty shoot out and it was Mills who held their nerve winning 5-4. For Eynsham, Chris Baldwn scored 2 to take his total to 7 for the season, with Lewis Wild and Ben Kinchin scoring the others. Ben Thrompson netted for the 3rd week in a brown for Mills to add to Dean Smith, Dean Spivey and Stu Cutts goals,

In the other tie Siege went down 6-1 to Swis. The scoreline probably flattered the visitors with Siege proving their equal for much of the match but failing to take the numerous chances created and they only had Andy Makepiece goal to show for their efforts.

There were 11 first round ties in the Fred Ford Cup and there were a few notable upsets. Division 2 leaders Fratellos were far too good for Premier Division Carterton FC Rangers, running out 5-0 winners. The opened the scoring within 2 minutes, Jack Allen latching onto Levi Cox cross to rifle past Daniel Floyd. The same player made it 2 within the opening 7 minutes. Rangers did come back into the game, but hardly threatened the home goal. Allen completed his hat trick on 35 minutes and this was effectively game over. In the 2nd half he scored 2 more to take his season tally to 11 in just 2 games. On this form Fratellos look a good bet to beat most teams in the league.

Another notable scalp was at Bampton where the joint leaders of Division 1 were beaten 4-1 by a rampant Ducklington. The visitors had the lions share of the opening half and it was only an excellent save from Ryan Bradshaw from Charlie Fisher that kept the score blank. Duck took the lead early in the second half, Jamie Harris pull back was turned into his own net by Jordan Day. The lead barely lasted 5 minutes, Tom Boot met a corner on the volley and turned it past George Townsend. But Bampton were only level for 60 seconds or so, Dan Stanley’s twinkle toes, saw him go past 3 defenders before slipping in Lewis Bartlett who’s drive went in off the underside of the bar. Lewis Hathaway then scored his first goal in a yellow shirt curling a delightful effort in from 20 yards, Fisher then completed the scoring in the final minute picking up a loose ball and passing the ball into the net.

There was a rare occurrence in WDFA parlance with a Brize Norton derby as the RAF sdie hosted the villagers. It was no real surprise to see the RAF boys dominate proceedings with an empathic 11-0 win. It wsa 5 - 0 at half time thanks to Phil Kenyon, Mike Flavell's hat-trick and a Dec O’Brien screamer in the top corner.
The Second half was more of the same with Flavell's fourth, Wez Christian rolling one into the bottom corner from 20 yards, Tom Dyer scoring 10 seconds after coming on off the bench, Kenyon's second and Nick Lister grabbed two off the bench as well.

Division 3 leaders Faringdon Town A just about proved too good for Division 1 Kingham winning an entertaining match 4-3. Robbie Harrington scored his 7th goal of the season to add to strikes from Adam Finney, Jack Green and Ronnie Platt. For Kingham Brad Smith, Toby Hitchamn and Dan Lay were on target.

There were 2 all Premier Division games Hailey overcame a spirited Minster Lovell winning by the odd goal in 5. Tom Gregory, Luke Bolley and Jack Wood netted for Hailey with Jack Scott and Ben Liddle scoring for the home sides.

It was a different story at Newland where visitors Hook Norton were emphatic winners over Spartan Rangers running out comfortable 6-0 victors. There were 2 goals apiece for Jay Mair and Max Harris with Adam Hemmings and Dan Bott scoring the others.

Enstone overcame near neighbours Chadlington 3-1 with Reece Bayliss scoring twice to add to Jamie Gregory’s opener. Alfie Peachey grabbed his first goal of the campaign for the visitors.

Another Premier vs Division 1 clash was at Charlbury where the home side were too strong for Witney Royals running out 4-0 victors. 17 year old Josh Silvester hit a brace for Charlbury with Karlston Hoyle and Sam Oliver scoring the others.

Division 3 Leafield put up a decent effort against Premier Division rivals Stonesfield before eventually going down 4-0. Carry Rice hit a hat trick for Stonesfield with Jack Barker grabbing the 4th.

Division 4 leaders Sherborne Harriers would have fancied there chances against Cassington Rangers who were thumped in the Junior Shield last week and have been struggling this season. But the visitors were emphatic victors winning 7-1. Josh Russell netted twice on his debut. With Shaun Rowbotham, Ash Bowerman, Tyler Walker, Marcus Owsnett and Nick Edwards scoring the others. An Isaac Goodwill penalty was scant consolation for the home side. The game was also notable for the return to WDFA of the legend that is Justin Keyani, division 2 defences watch out!!!!!

There was only 1 game in the Premier Division and it was a repeat of the opening day’s fixtures as Milton hosted Hamborough. The visitors recorded a quick fire double winning 4- 1, but the score was harsh on Milton who had they been sharper in front of goal may have got a point from the game, Alex Ayres again scored for Milton and there were doubles for Jack Morton and Craig Mays for Hanborough who climbed to 3rd place.

Again there was just the one game Division 1 as the division’s 2 Reserve sides met with Hally hosting Minster Lovell. An entertaining game was won with a rare Adam Clarke goal and a 3rd of the season from Ben Daniels for Minster to maintain their 100% winning record and go joint top of the table.

The two bottom sides in Division 2 met with Hook Nortin Res hosting Aston with both teams looking for their 1st points of the season. And it was the visitors who gained the win in emphatic style winning 10-4. Kieran Watts (3) Cairo Cuss (2) and Nick Angus (2) added to strikes from Lewis Scott, Charlie Harper and Jamie Austin. For Hooky leading scorer Mitch Faulker added 2 more to his total with Joe Shirley and Ash Booth scoring the others.

Spartan Rangers Res also earned their first win of the year running out 4-1 at Carterton Te highlight was a 40 yard pile driver from Matt Foley. This added to a goal from Donny Henderson -Sowerby and a double from Brandon Fenwick. Joe Pyne scored the visitors consolation.

Division Three
Leaders Hailey A extended their lead at the top of the table to 4 points as they defeated Milton Res 2-0. Tommy Burns bagged them both to take his total to 4 for the season,

Wootton Res earned their first win of the season with a 4-1 win at Brize Norton Res. New signing Dan Mundy-Court marked his debut with a brace and Dan Bourtin and Mark Minchin added the others, Joe Hatt scored for Brize.

Faringdon Town B went to the top of Division 4 after defeating Aston Res 2-1. Faringdon scored after two minutes through Nick Loveridge and were much the better side in the first half.
Aston equalised four minutes into the second half when a right wing cross was bundled over the over the line by Alex Murrell. Both teams had chances to win it, but Faringdon had more possession and finally scored from a corner with a header from Jamie Broadfield.

Freeland Res moved into 2nd spot on goal difference maintaining their perfect start to the season with a 2-1 over Stonesfield Res. Spencer Lancaster and Rob Keylock scored for Freeland with Luke Burns replying for Stonesfield who surprisingly are still looking for their 1st points of the season. .