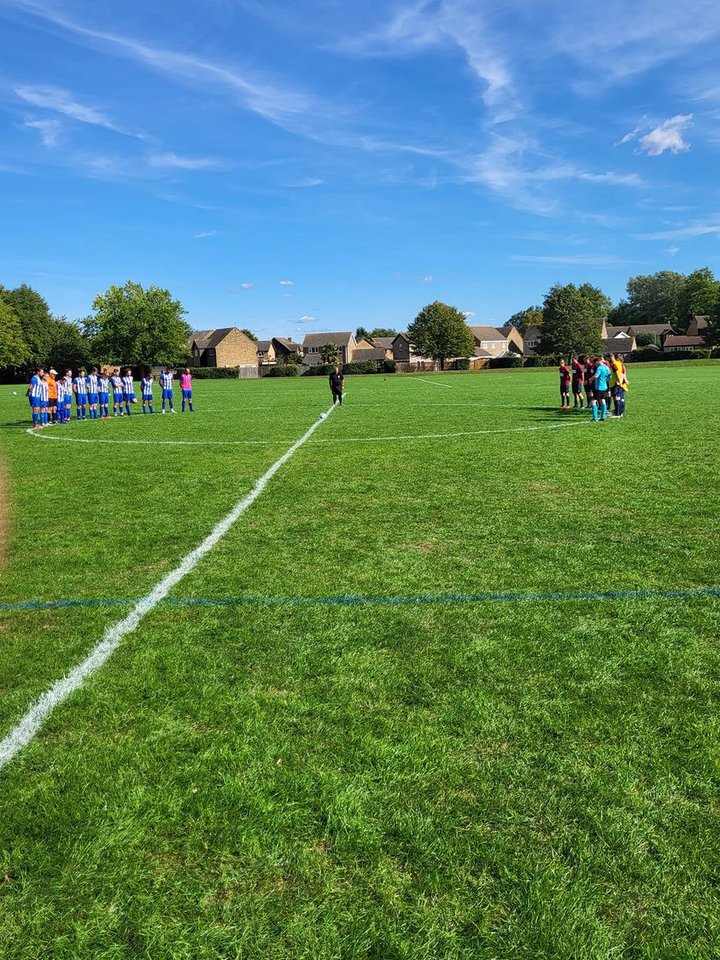 The whole of the WDFA fell silent at 2:00 as players, officials and spectators all impeccably remembered the life of our late Queen.

Premier Division champions Hailey opened their campaign against Division 1 champions Freeland. The visitors arrived with a very makeshift side, missing 5 or 6 regulars. But stunned the home side by racing into a 2 goal lead, thanks to strikes by Liam Harris and Rob Keylock. Nathan Kimber pulled one back and Freeland were clinging onto the 3 points going into the last 5 minutes, but a late Freddie Buckingham goal saw the points shared.

Enstone appear to be the most likely challengers to Hailey's title, especially after picking up the leagues top striker Jay Mair from Hook Norton. He started the season with just the two goals as his new team defeated Charlbury 5-1. Nathan Bott went one better hitting a hat trick. Charlbury's consolation was an own goal.

A solitary goal from Jordan Newman was enough for Stonesfield to pip Hanborough 1-0. The home side also had Craig JOhnstone sent off to add to their woes.

The points were shared at Newland as Spartan Rangers and newly promoted Minster Lovell drew 1-1. There was a debut goal for Minster for Jacob Hughes but Frank Clarke levelled.

Even at this early stage in the season it would take a brave man to call the Division i champions. 5 or 6 teams all seem capable of beating each other.

After getting well beat last week Combe bounced back with a 5-1 win over Hailey Res. Charlie Ibbotson lead the way with a hat trick to add to goals from Luke Barton and Ciaran Northwood. Gary Mitchell replied for the home side.

Another man bagging a hat trick was James Scott for Tower Hill. He scored all his teams goals as they saw off Chadlington 3-0.

Carterton are certainly bullish about their chances of protion and they started in fine style defeating Heyford Athletic 2-1. Jack Bellenger scored a brace for the home side with Kieran Chambers replying.

Ducklington have lost over half of last season's squad so probably face a season on consolidation. But new manager George Townsend started his reign with a deserved 2-1 victory at Faringdon Development. Max Davision scored his 1st goal in 7 seasons to add to a Charlie Fisher opener. Liam O'Sullivan scored for the home side.

Aston were held to a home draw for the 2nd game in a row,as Witney Royals shared the points in an entertaining 3-3 draw. Last season's leading marksmen were on target twice for both sides with Lewis Scott and Corey Donohoe scoring. Kieran Watts netted Aston's 3rd whilst Stu Tranter starting probably his 30th season in the WDFA netted for Royals.

RAF Brize Norton started their season with a 2-2 draw over Hatherop. Carl Drury and Mike Flavell scoring for the home side and Jake Denness and Mason Hathaway replying.

The days biggest scorers were Hatherop Res who thumped visitors Hailey A, 11-0. Paddy Cripps lead the way with 6 of the goals and there was a double for Matt Anderson. Adam Townsend, Harvey New and Richard Stearne added the others.

Kingham have already got close to last season's win total after 2 games of the season. They maintained their 100% record with a 8-1 thumping of Leafield. Their were 2 apiece for Jonty Russell and Mitch Faulkner and Lewis Pretorious, Dom Hemmings, Dylan Ellis and Sam Alvin. Although Pretorious day was spoilt with a 2nd yellow card. Ciao Jusius scored Leafield's consolation.

Brize Norton made it 2 wins from 2 as they saw off Eynsham SSC 4-1. Dylan Briggs, Alfie Gardener, Jason Hirschfield and Adam Davis scored for Brize. Ben Oates netted the consolation.

Jamie Kennedy started his 20th season in the WDFA and chalked up another club on his CV. He made his debut for Siege and helped them earn a point in a 1-1 draw against Bampton. Mykel Ryan scored for Siege but this was cancelled out by Jake Pritchard.

Milton claimned the 3 points against Faringdon A - report from their FB page.
Manager Dan Hooton had the full squad to pick from after the First Team game against Hook Norton was conceded by Hooky for reasons yet to be be confirmed which allowed Dan to fill the full 16 spaces in the match day squad for the trip to Faringdon.
The sun was shining down on Tucker Park and the boys soon got in to game mode when the tunes started pumping in the changing rooms.
The game kicked off and Milton started straight on the front foot attacking the Faringdon end and knocking the ball around beautifully. With only 5 mins gone JC picked up the ball and zig zagged through the Faringdon defence to find himself 1 on 1 with the keeper. An elegant chip over the on rushing keeper saw Milton go 1 up and utter disbelief within the supporters that JC had finished his own move like he was Erling Haaland. Milton continued the half as they started and played great, positive, passing football. A dodgy call from the Faringdon linesman saw James Simpson have a potential goal of the season ruled out but other than that, we failed to find that 2nd goal that the performance definitely deserved. One lack in concentration saw Faringdon find an equaliser from a long ball forward that didn't get dealt with and the forward slotted it home well.
HT Faringdon 1-1 Milton
After a positive half time team talk, the lads entered the pitch knowing that a similar performance to the first half, but with better finishing, would surely help us secure 3 points. Once again we started strongly but Faringdon had definitely grown in confidence and were getting better as time went by. A few changes saw Freddie Rix take the lone striker role. And soon after he got his chance. Pat Doe collected the ball and distributed the ball perfectly to set Fred through 1 on 1. A calm, slotted finish saw Milton take the league again. And from that we grew and really started dominating the game. Chances were created but as with the first half, our finishing was poor and we saw plenty of chances go by without the finish they deserved. Finally, new signing Ryan Oliver picked up the ball in the middle and slotted a through ball to George Ford who finished his chance well. 3-1 to us and looking comfortable. That was until we handed a free kick to Faringdon on the edge of the box. A floated ball in to the box saw a Faringdon player find an acre of space and put his free header away well. 3-2 and a nervy last 5 minutes but the lads held out well and got the points they deserved.
If we could finish, we could have scored a lot more and the result would have been more than comfortable.
Massive thanks to everyone who came along and supported the lads. Was great to see so many there showing there support.

Wootton recorded back to back 4-0 away victories to head the embryonic divison 3 table. The goals were shared amongst the team with Asha and Gary Townsend (no relation) and Theo Flatman and Liam Robinson scoring.

New boys Yarnton A also maintained their perfect start as they defeated Kingham Res, 2-0 with goals from Dean Riseley and Cameron Heyring.

An exceptional goal from Mauro Esteves earned CHadlington Res a point in a 1-1 draw with Deer Park Rangers. His scissors kick from 8 yards was perfectly executed and cancelled out Harry Edwards spot kick opener.

Tower Hill Res earned their 1st points of the season at Sherborne. A josh Betteridge penalty put the home side ahead but was cancelled out by Liam Aust and Will Watts added the winner.

Eynsham SSC Res are also off the mark as they defeated Leafield Res 2-1. Chris Baldwin and Matt Hughes scoring for Eynsham and Luke Washington replying

 WDFA Match Reports - Week 4 I got you babe