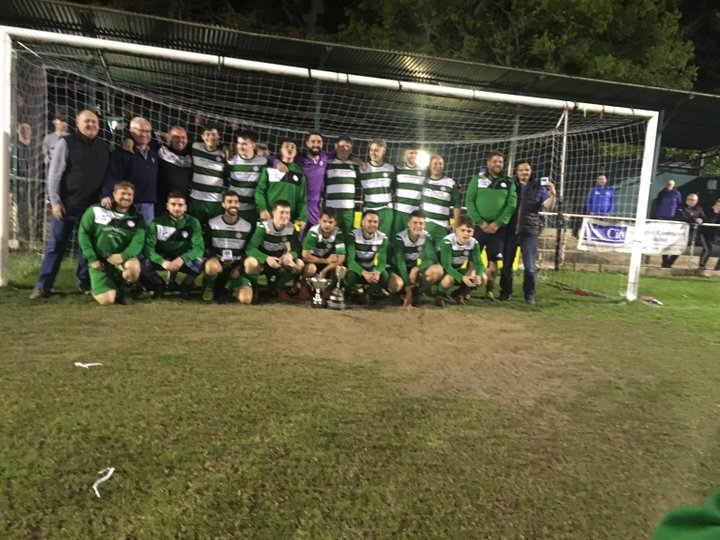 After a dramatic game that had just about everything, Hailey lifted the Ted Young Senior Cup, by beating FC Hollybush in a penalty shoot out

The opening encounters of this game showed that there wasn't going to be too much between these sides.It was 15 minutes into the match before we saw the first meaningful strike on goal, Dan King's effort from just outside the box forcing Shaun Rayfield to get down quickly at his near post. Great Then a Nathan Kimber cross for Hailey, fell invitingly for There followed another period of battling Freddie Buckingham, but he was not able to control the bouncing ball and it ran to Matty Howard in the Bush goal. Rayfield then dropped a cross and the ball fell to Craig Mays, but he couldn't keep his shot down.

Just after the half-hour mark Hailey suddenly produced a flowing, one-touch move that was without doubt the best piece of action in the game so far. Unfortunately for them the final effort from Travis O'Connor sailed narrowly wide of the mark. With the clock ticking down towards half-time, Hailey were almost gifted the lead when Matt Howard dropped a right-wing corner but luckily for the Hollybush keeper there was a defender on hand to hook the ball off the line and to safety. The fumble seemed to shake the keeper and, shortly afterwards, he fumbled another ball giving Hailey striker Jack Wood a chance which was just about snuffed out by a saving tackle from a jack Robinson.

At the start of the second half it became the Kimber and Howard show. The Hailey winger started on the right and twice drifted in in his left foot that forced Howard in smart saves. Just on the hour mark Bush were reduced to 10 men. Dan King's tackle was high, on Buckingham and ref Travis Rolls had no hesitation in producing the red card.

From the free kick Kimber again tested Howard and from the corner that followed, Sean King rose highest in the area to power home a header.
Hailey would have expected to go on and win the game now, but Bush had different ideas, a brad Bryant free kick was hit in with pace and probably the smallest man on the field, Danny Brearley was able to head home unchallenged from inside the 6 yard box.
In the closing stages it was again Kimber v Howard the keeper was brilliant in keeping out 2 goal bound efforts.

So into extra time and Hailey were dominant, but their goal came from the spot, Carl Austin was adjudged to have fouled in the area and Jack Wood calmly rolled his penalty into the corner. In the final minute of the half, Howard again pulled off a wonder save this time denying Buckingham from 25 yards.
The second period saw Hailey comfortably holding on, then in the final minute one last push from Bush saw Mays in the box, Rayfield committed himself, but took man rather than ball, and Ref Rolls had no hesitation pointing to the spot. It was mays hisself who stepped up and he hit the ball hard and true into the corner.

A fine game that took a bit of time getting going, but congratulations to Hailey on a magnificent cup double.

This was also the final game FC Hollybush will play together. They are moving on to pastures new next season, although staying in the league. Good luck to them.