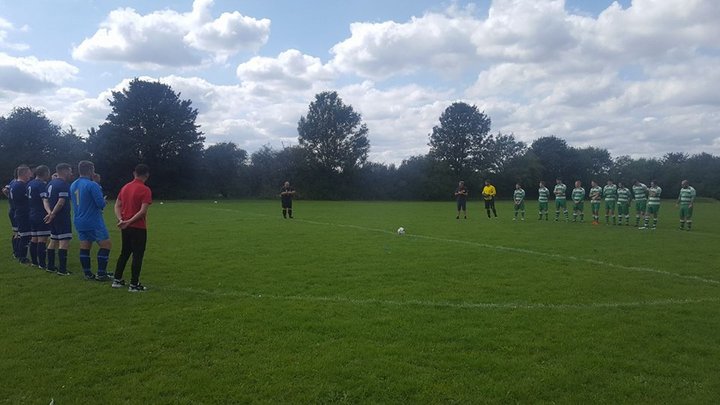 The WDFA season, got off to a sombre start with all games holding a minutes silence in memory of League President Bob Watts, who recently passed away. Bob had been involved with the League for over 50 years as a player, Committee Member, Secretary and laterally President. He will be sadly missed by all and our sympathies go out to his wife Margaret and all family.

Premier Division new boys FC Hollybush, were given a tough opening fixture away at Kirtlington and trailed 3-2 at the interval, but turned the game around in the second half to run out 5-3 winners, Craig Mays bagged a hat trick on his debut for Hollybush to add to a Bradley Bryant strike and an early goal of the season contender from Dan Bishop. Shane Probitt, Alex Metcalfe and Tom Williams replied for Kirtlington.

The only other game in the division between Hailey and Carterton Town A was settled inside the first minute, a mistake in the home defence let in Dave Wanless to score. Defences were then to the fore for the rest of the game as Carterton held on.

Aston will be one of the favourites for promotion from Division 1 after narrowly missing out last season, they got off to a great start thumping relegated Eynsham 5-1. There were braces from Ryan Colleton and James Fleming and 1 from Darren Harriss. John Ayres netted for Eynsham, who did not help their cause by having a penalty saved by Ashley Edwards when the score was 3-1.

Newly Newly promoted Tower Hill, will also fancy their chances of achieving for the third season in a row. They were made to work really hard for the 3 points at Milton winning a close fought encounter 4-2. James Scott scored 2 to add to goals from Jamie Mariani and Adam Bolley. Stephen Pearce and Alex Ayres were on target for the home side.

Bampton and Stonesfield were involved in a fiesty 10 goal thriller with the visitors running out 6-4 winners. Bampton would have thought they would have the points won as they were winning 3-1 at the interval, but Stonesfield pulled out all the stops in the 2nd half to get the 3 points. Conor O’Shea, Daniel Paintin and Nathan Beckett (2) scored for Bampton, with Raffy Rice, Liam Hatton, Jamie Gardner and an Own Goal, adding to a Jordan Newman double.

Bourton Rovers have moved a side over from the Cheltenham League and they made the trip to Witney Wanderers to make League debut. They travelled back over the Gloucestershire border with the three points after a convincing 5-0 win. Veteran striker Matty Winter lead the way scoring twice, with Josh Fielding, Lee Mosson and Ben McPhililmey scoring the others.

After narrowly avoiding the drop last season, Brize Norton made a great start to this season, winning 3-1 against Hailey Res. Haydn Parker scored 2 of the goals with Dan Humm adding the other. A Mark Orpwood penalty was scant reward for Hailey who had Ash Mills sent off for 2 yellow cards.

There is a new management team in place at Middle Barton this season and they made a great start beating newly promotted Aston Res 3-0. Nick Higgs, John Umney and Liam Barnes were the goalscorers.

Bourton Rovers Res were not as successful as their first team as they made the trip to Ducklington and were spanked 8-0. Sam Doherty scored a hat trick and there was a brace for Courage Nyenya and a rare double for Tom Townsend. Ciaran Doyle, scored the goal of the game striking home a 30 yard volley.

Siege will probably start the season as divisional favourites after running away with the Division 4 title last season. They opened the season in fine style with a 5-2 win at Chippy Res. Andy Makepiece made a dream debut scoring 4 times with a Lee Masden scoring the other. Rocky Burton and Michael Doybrava scored for the home side.

The days other game in the division sadly ended was abandoned early as Mills striker Aaron French broke his tibia and fibia following a challenge. All in the WDFA wish Aaron well and a speedy recovery.

Last season’s bottom two sides Eynsham Res and Spartan Rangers A, met in the opening week. It was sadly a day to forget for the home side as they were thrashed 13-0. Sam Quinn scored a 4 timer and there were hat tricks for Scott Mason and Joel Spalding and a brace for Dan Jeffrey. Keeper Jamie Hopkins scored the last from the spot.

Two of the division’s new sides, Ascott Rangers and Bletchington Res met with the visitors setting out their credentials with a fine 8-1 victory. Michael Trafford was another player to score a 4 timer, Richard Wells added a hat trick and Nigel Taylor the 8th. Mick Ody rolled back the years as he scored a screamer for Ascott.

Another of the division’s new boys Carterton Town B, made the short trip to Brize Norton Res and came away with a point after a fine 0-0 draw.