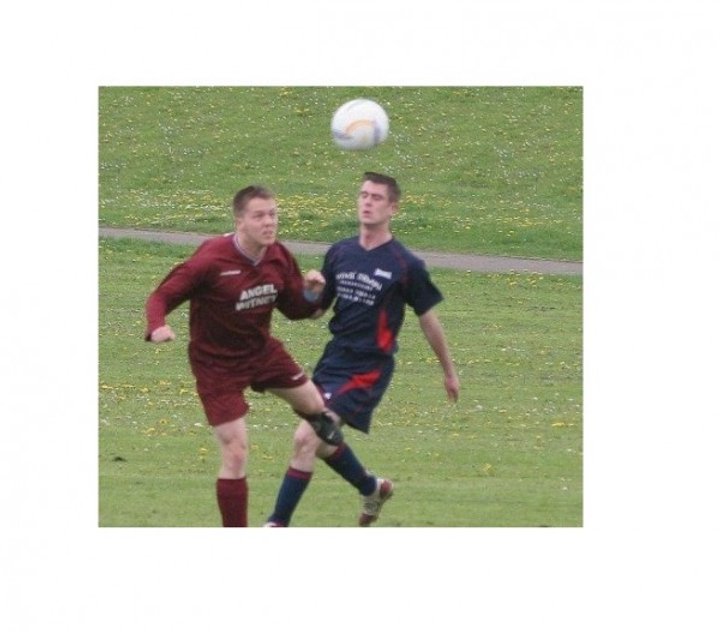 Pawel Bronk scored a hat trick in Two Rivers’ 7-4 win over Ducklington Reserves. The score was a modest 3-2 at half time with Martin Bungay adding a brace to the hosts’ tally. Justin Elford and Pawel Kulczyk also scored for Rivers as Lee Beer and Charlie Fisher each scored twice for Duck.

West Witney are through to the Quarter Finals of the Junior Challenge Cup after a 3-1 win over their close league rivals Chad Park. Tony McLeman scored twice with Josh Soloman adding the other.

Lee Moseley, Jason Lonsdale and Will Smaldon were all on target in North Leigh A’s 3-0 win over Charlbury Town Reserves.

Supplementary Cup
Kingham AB Reserves eased through to the quarter finals of the Supplementary cup with a 4-0 win over North Leigh B. Sam Philpott grabbed a hat trick with Richard French netting the fourth.

Tim Green scored twice in Aston Reserves 2-1 over Witney Royals A after Anthony Barlow had given the visitors an early second half lead.

Premier Division
Goals form Matt Townsend and Dave Cross sent Spartan to the top of the league on Saturday after their 2-0 win over fellow title chasers, Ducklington.

Combe also went down 4-1. Josh Povey scored the goal for the hosts but a Craig McCallum hat trick and a strike from Andrew Woodley put the result beyond doubt.

Ed Dunne scored the only goal for Minster Lovell in their 3-1 defeat to Kingham AB. Matt Smith, Dan Davies and Jonty Russell grabbed the winning goals.

The points were shared at Wychwood Forrest where the hosts came back twice to hold Witney Royals to a 3-3 draw. Chris Coggins, Steve Green and Ryan Colleton gave the visitors the lead but a brace from Mike Duerden and a Mike Bolt strike gave the score line parity.

Division One
There were no surprises in the only game in Division One as Brize Norton beat Witney Wanderers 4-0. Colin Tyrell, Mark Jewell, Matt Howard and Rich Taylor scored the goals.

Division Two
Tom Baldwin was the star of the show in Ducklington A’s 9-0 thrashing of Milton. Dave Duggan added 2 with Gary Forest, Jason Hirschfield and Will Graham completing the rout.

Performance of the day goes to bottom placed Spartan Rangers Reserves who beat promotion chasing Southrop 3-1. Andy Blissett scored for the visitors but James Simpson, Tom Merchant and Ben Lucas were on target for the hosts to put a dent in Southrop’s promotion hopes.

Rob Hook, Ollie Puddle, Liam O’Brien and Steve Morgan were all on target in Brize Norton’s 4-2 win over Hailey Reserves. Kristian Collis was amongst the goals for Hailey.

The point were shared at Middle Barton where the hosts could only manage a 3-3 draw with struggling Wootton. Martin Kay, Ashley Scearce and an own goal completed the hosts tally whilst Tom Williams (2) and Liam Gubbins scored for Wootton.

FC Chequers Reserves and Freeland A shared took a point each in their match which finished 1-1. Mark Kutcylo levelled the match for the hosts after Adrian Williams had given the visitors th lead.

Eynsham A went down 4-2 to FC Hollybush. Callum Tolmie and Jamie May scored for the hosts but were outdone by the visitors for whom Paul Dray, Steve Aldous, Ed Brookes and Dan Smith all scored.