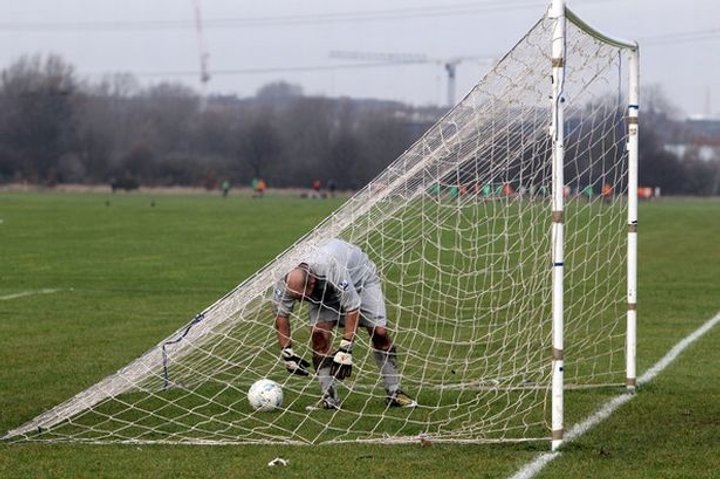 Two of the title favourites met in the game of the day in the Premier Division as Enstone hosted Carterton. The visitors took an early lead as a deep cross found Dan Bishop in the box, his shot came back off the bar and Tom Harvey reacted quickest to thump home the rebound. But the lead was short lived as Enstone were awarded a penalty after a clumsy tackle. Skipper Nathan Bott coolly dispatched it past Mike Hedges. The rest of the first half was evenly matched, Bott forced Hedges into a fine full length diving save and Reece Bayliss saw a free kick skim the top of the bar. At the other end Harvey saw another effort come back off the bar.
The second half was much of the same, with both sides creating half chances but the course of the game changed in 2 minutes. Firstly from a Carterton corner, Bishop found himself in acres of space and when the ball dropped to him he struck it past Danny Phillips. Bishop then signalled he wanted to come off, Brad Bryant came on and his involvement was to give away a foul. For some reason Bayliss reacted to this and kicked out at Bryant, forcing him off injured and giving ref Cliff Grove no option but to show him red. From then on Carterton comfortably saw out the rest of the game and maintain their 100% league campaign.

Carterton Rangers are up to the dizzy heights of 2nd place after bearing Charlbury 5-1. Charlbury ahead inside 2 minutes through Josh Sylvester and kept it that way for 20 minutes. Damian Williams equalised with a towering header in the box and then the Myles Easton show took over. He scored a 15 minute hat-trick with the time remaining in the first half to make it 4-1 at HT. Charlbury were much improved in the second half but never tested Daniel Floyd again. Easton finished the scoring on 70 minutes calmly slotting past the keeper for 5-1 and make it 9 for the season.

Milton made it back to back wins as they overcame a disappointing Tower Hill 4-2. The game was effectively over at half time as Milton raced into a 3-0. With George Ford adding to a Stephen Pearce brace, Pearce completed his hat trick in the 2nd half and although Lewis and Jack Scott pulled goals back it was never enough.

Stonesfield earned their first points of the season in emphatic style as they thrashed Minster 7-1. A double for Raffy Rice took his total to 9 for the season, whilst brother Carry opened his account. Other goals came from Tom Weedon, Liam Harris and Luke Holdsworth. Mykel Ryan netted Minster’s consolation.

With Hook Norton hosting Bampton at least one of the league’s 100% record had to go. Hooky were without the leagues leading scorer Jay Mair who was away on international duty. In his absence Max Bayliss stepped up to the plate and capped an outstanding individual performance with 2 goals Max Harris and Dom Hemmimgs scored the others as Hooky ran out 4-2 winners. There were first goals of the season for Conor O’Shea and Lloyd Hancock for Bampton.

Bletchington are up to 2nd place after defeating bottom side Brize Norton 4-1. Jamie Hudson scored twice to double his tally for the season. Craig Dawson and Skipper Tom Knox scored the others. Haydn Parker scored for Brize who are still looking for their first point of the season.

A solitary game from Lee Spencer was enough for Wootton to defeat Chdlington and lift them into 4th place.

Tuesday night saw the first Witney and District match under lights as Carterton Reserves played Kingham All Blacks. What took place was a lively encounter at Kilkenny Lane. Carterton certainly bossed possession with Jamie Kennedy and Chris Hirons controlling things in the middle of the park. But Kingham always looked threatening on the counter attack with Gaz Price and Dan Lay looking particularly menacing
An even first half saw the Kingham keeper have his palms stung on a couple of occasions after making fine saves. At the other end Dan Lay turned Carterton defenders inside out before tamely firing into Tomasz Mazur’s steady hands and Kingham also hit the post but half-time came with the sides at 0—0.
The second half saw much of the same and frustration started to grow. A couple of meaty challenges saw necessary conversations from the man in the middle.
At one end Dan Lay and Gaz Price missed golden opportunities to break the deadlock for Kingham. For Carterton, Carl Wlliams slipped on two occasions in the box whilst through on goal, Dave Cross fluffed his lines from 3 yards out in a goalmouth scramble and Chris Hirons and Tommy Burns were wildly wide from long range efforts as desperation mounted.
As the clock ticked to 90, Carterton fired a free kick directly into the Kingham wall. With the Kingham left back dawdling on his clearance Chris Hirons chased him down and won the ball back with a well-timed slide tackle, he stormed into the box and fired a strike in at the near post to beat the keeper and break Kingham’s resolve.
The full-time whistle followed just 30 seconds later, much to Carterton’s delight as they maintained their 100% start to the season, just about!

Next Tuesday 27th October Carterton Res will host leaders Hook Norton at Kilkenney Lane with a 7:30 kick off. It may worth a trip out!!!!

Division Two
With leaders Ducklington’s game against Bourton Rovers postponed, both Aston and Combe had the chance to leapfrog them with a victory, but both sides failed to take the opportunity.

Combe’s youngsters were undone by one of their old boys as they were held to a 1-1 draw by Wottoon Res. Sam Coles goal for Combe was cancelled out by James Minchin’s 3rd of the season. It also earned Wootton their first point of the season.

Despite a Charlie Harper double Aston missed out by going down to Eynsham SSC by the odd goal in 5. Ben Oates scored his 5th of the season to add to an own goal and a Tom Cattell strike. The win moves Eynsham into a 3 way share of the top spot.

After a sluggish start North Leigh recorded their first win of the campaign as they saw off a weakened Milton Res 3-0. Liam Varney was on target twice and Lloyd Lewis added the 3rd as North Leigh moved up into 9th place

There is a 3 way share of the top spot of Division 3 as Bampton Res, Hailey A and FC Mills all won to sit on 12 points.

Bampton Res are scoring goals for fun at the moment and they made it 25 from 5 games after thumping 10 man Chipping Norton 8-2. Seb White added 4 more to his total to make it 14 for the season, there were 2 apiece for Regan Pritchard and Gary Mitchell. Darren Bridge and Yusuf Okunande scored for Chippy who were with 4 players pulling out in the morning.

Ryan Stockford added 2 more to his total for Hailey A to take him to double figures for the campaign. Will Lyne also netted twice with Karl Smith and Curtis Hathaway scoring the others. The evergreen Mev Gundem replied for Spartan.

FC MIlls twice came from behind to see off a determined Stonesfield Res 3-2. Sam Hibberd and Tom WIlson put Stomesfield into the lead but they were pegged back by goals from Daren Smith (2) and Dan Hedges.

The days biggest scorers were Witney Royals Res who travelled over the Glocs border and came away with a thumping 12-1 victory. There were hat tricks for Reuben Werthein and Daniel Townsend, 2 for Nathan Harris and Jordan Pratt and 1 apiece Stuart George and Joe Dallimore. Rael Mills scored Sherborne’s consolation.

FC Ascott Rangers and Brize Norton Res shared the points and 6 goals. Ascott , however will feel that they should have picked up all three points conceding a headed goal from Brize keeper Scott Hempsall in injury time. Earlier Sub Brian Wright had scored 2 for Ascott and Brandon Laing 1. Dan Sollis and an Own Goal were Brize’s other scorers.

There two outstanding Jack Busby Trophy 1st round ties. And they were won in contrasting ways. Aston Res hosted Spartan Rangers Res and were routed 10-1. Both Josh Walkington and Ben Madley bagged hat tricks for Spartan. New signing Omar Semlali scored 2 on his debut and there was one each for Dan Jeffrey and Fabio Fernandes. Jake Worth grabbed Aston’s consolation.