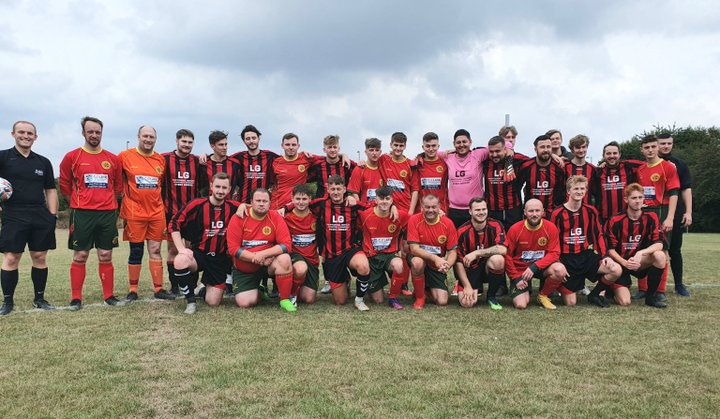 The new season got off to a truncated start with barley a dozen games being played mainly due to pitches not being available and cricket.

The league welcomed a number of new clubs, but were back to a 4 division format.

he first team travelled to Witney based Spartan Rangers with a depleted squad. Only 13 players on the team sheet, and one of them being manager Pat King who hasn't played for several years. If anything though, this brought the squad closer together and even more determined to go out and get the job done.

We started the game well and were instantly on the front foot as part of the plan was to pin them in their half due to our lack of out and out defenders. We created plenty of chances but lacked the final touch needed to put the ball in the net. Multiple corners lead to nothing but it was a hugely positive half although we didn't get the goals we thoroughly deserved.
HT' Spartan 0-0 Milton

The lads stepped back on the pitch for the second half full of positivity but also aware that Spartan might come out fast. Thankfully it was our positivity that showed more and we were straight on the front foot again. From the restart we found Alex Ayres out wide who found Josh Catling in a position to have a strike from distance. Mitchell Constable gambled and after getting away from his defender, prodded the ball in at the back post. 1-0 up and barely 20 seconds played in the second half. Then 2 minutes later we got the 2nd goal that the performance so far had deserved. Mitchell had possession on the half way line and played a cracking through ball to Josh. A race between Josh and the defender was only ever going to have one winner. A couple of touches from Josh saw him on the 18 yard line with the Spartan Keeper rushing out towards him but he fired it past him to put us 2-0 up. We continued to push forward and create chances and Spartan were getting frustrated and giving away plenty of fouls. More chances for us to get the ball into the box but unfortunately no more goals came. As time went by, and due to our lack of subs, legs got tired and Spartan pushed forward for the last 15 minutes. However, a solid defensive performance from the whole squad eliminated any threat Spartan had.
FT' Spartan 0-2 Milton

A determined performance by all involved. Players playing out of position but did so impeccably. That result was achieved by the togetherness of the squad and the willing to work hard for each other. We said before the game that we wanted to leave absolutely everything on that pitch and we definitely did that.

3 of the new were all in Division 1 and featured in opening day ganes.

Heyford Athletic have joined the league from the Oxon Senior League and opened their campaign with a credible 2-2 draw at Aston. Kieran Chambers scored twice for the visitors, but they were pegged back thanks to Aston goals by Lewis Scott and Charlie Harper.

Tower Hill returned to the league after a couple of years away, the majority of that squad have returned and they will fancy their chances of being in the promotion race. The made the trip to Faringdon Development who were Division 3 champions last season. Once again the points were shared after a 1-1 draw. Liam O'Sullivan scored for the home side, but Will Hayes came off the bench to earn Tower a point.

The 3rd new side are Hatherop who hae come over from the Swindon league to join their Res. They were handed a tricky opener against Junior cup holders Combe, but they came out with all guns blazing running out 4-0 winners with goals from Christian Turner-Williams (2) Nat Cramp and Alex Anderson.

The days biggest scorers were both in Division 2 as Kingham and Cassington hit 7 & 6 respectively.
Kingham have had a pretty sad time recently barely stringing a couple of decent results together, but they will hope a drop in division will help them and they certainly proved too strong for Hatherop Res. Mitch Faulkner already looks a good bet for thr golden boot and he bagged a hat trick to ad to strikes from Jonty Russell, Lewis Pretorious, Dom Hemmings and Yusuf Okunande.

Cassington will probably be amongst the favourites for the title and they started out in emphatic style winning 6-0 against Milton Res. Milton turned up with the bare 11 and despite sterling rearguard efforts they were not able to cope with their oponents. The goals were shared amoingst the team with Jason Blackman, Ross Lewington, Jordan Lyne, Daniel Bourton, Max Gallagher adding to an own goal.

Siege will also fancy their chances in the division especially with a few ex Carterton Rangers players in the squad, however they came up against a strong Hailey A side and 2 goals from Curtis Hathaway earned the home side the win.

Brize Norton made the trip to Faringdon are scraped home by the odd goal in 5. Dylan Briggs scored twice for Brize with George Sheldon adding the 3rd. For Faringdon, Gareth Eltham and Tom Walsham were on target.

There were also 4 new teams in action in Division 3. Deer Park Rangers played their 1st ever game at home to Carterton Town and buoyed on by a large crowd, they made all the early running against the team who finished the bottom of the league last season. But against the run of play Carterton took the lead when John Bevan fired home. But Rangers leveled on the stroke of half time as Brandon Laing was put through and he fired past Lee Williams. The 2nd half was a similar story with Rangers dominating and squandering chances and just as it looked like Carterton would snatch a point, Dan Squires popped up at the back post to force home a corner. The result was made safe when Laing added his second in the closing stages.

Yarnton entered a side in the W&DFA for the first time in many years as their A team joined the fray. The opened with a 2-1 narrow win over another of the new sides Eynsham SSC Res. Jacob Sheel and George Greening netted for the home side and Ben Oates replied.

The 4th new side were Tower Hill Res and they hosted Wootton. The visitors proved too string for a youthful Tower side with Jamie Hutton scoring twice, Asha Townsend netting a debut goal and James Trafford scoring only his second senior goal at the age of 35. His last goal was 6 seasons ago and he celebrated like a man, who had been told that he had been invited for a night out with Beyoce, Rihanna and a troop of Kardashians, all the time still wearing his trainers as he forgot to put his boots on.

The final fixture saw Kingham Res emulate their 1st team wth a 3-1 victory at Aston Res. Jamie Youngson scored a brace and Ellis Godin the other. For Aston Jack CHaundry was on target.